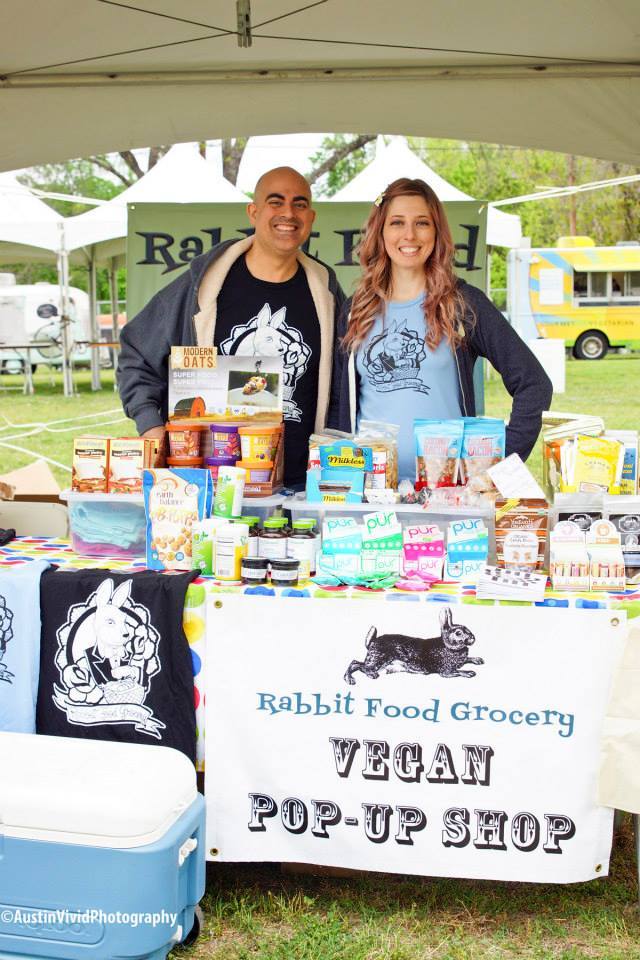 Sometimes when you talk about veganism people call you an elitist and say that a vegan diet is too expensive.

Mostly, it’s cause people are dicks and they have to give you a hard time about something.

But, beyond that, I never understood this argument since the vegan meal is  almost always the cheapest entrée  on the menu, especially if you have to make your dinner from the sides portion.  Maybe people think that because guacamole is usually extra?

Anyway, for years I’ve wondered about this idea of veganism being more expensive and I think now I finally get it. The reason that you spend more when you are vegan isn’t because you are buying more expensive food, it’s because you find all sorts of great people and causes to donate too. People don’t want you to know that vegans are actually awesome and they are always doing cool shit like saving elephants, planting trees, and in this case, building an all vegan grocery store.

I’ve been hearing Jessica talk about her dream to open a vegan grocery store since before I even knew her IRL. This is something she and Gabe have been working on for a million years. They have been so successful with their online shop and pop-up shops (blogged about here) because they have got their shit together. They are the kind of brilliant vegans who are always working towards the cause to save animals. When I saw a pet bunny being carried down the road in my neighborhood by a dog it was Jessica and Gabe that I called to help me with it. And of course, not only did they help me save that bunny but they ended up adopting it. I trust these people with my vitamins, my dog food, and I know that I never have to order some special new vegan product because Rabbit Food will be the first to have it in stock.

I am so excited that that they are finally getting to open the store. Reading that in addition to groceries they will have a vegan coffee bar with bagels and homemade cream cheese, breakfast tacos, and a community event space is making my heart pitter-patter with enthusiasm.

So today I am asking you to check out the Rabbit Food Grocery Kickstarter and donate if you can. They have tons of cool prizes for out of town people too and think about how exciting it will be to shop here! No label reading! Lot’s of cookies! It’s going to be the best!

This year organizers of South By Southwest Eco were nice enough to give me a free pass to attend the conference. Although I’ve been to the interactive, music, and film conferences quite a bit over the last few years this was my first time attending the new-ish eco. I went full throttle into attending as many panels as possible on everything that I am interested in. I loved learning about the potentials of 3D printing, technology that’s helping wildlife, the importance of storytelling in the movement, and how the first refugees and victims of climate change are trying to save their own lives.  The eco conference is supposed to combine scientists with technologists and industry leaders to create solutions to climate based problems. In the past, people have asked me to do a panel on veganism and the environment but I didn’t feel like I was enough of an expert on the topic…until I went to sxsweco.

At first I was surprised by the lack of programming on the topic of veganism, especially since there was a whole theme of food and agriculture. I was even more surprised that the v word hardly came up! Only one panel I went to mentioned eating vegan to help the environment, and that was the panel about in-vitro meat, beyond meat, eating crickets for protein and 3D printing. I guess one of the best parts about the whole experience was learning how naive I am about what people actually know about meat production in our world and that there are so many opportunities for education. At one panel they showed just one image of the pollution caused by one factory farm and the entire room gasped. I wanted to just print out articles, studies, statistics, and infographics and start handing them to people.  I heard over and over again about urban farming and vertical farming and plans to not over fish the sea, and plans to detox the sea, and that there is so much plastic in the sea, and that throwing out a half of a pound of ground beef is the same as taking a 90 minute shower, and how the tides are rising are displacing so many people, and weather uncertainty, and what can we do to make a difference. And then I heard the chatter from out-of-towners about how much they loved Texas barbecue and which place would they try next. I saw them lining up at the cheap hamburger stand across the street. I expect that at interactive and the rest but I really thought people traveling to a conference on the environment knew about the impact of cheap beef.

I didn’t know it was a secret that the easiest way anyone in the world can make a difference is to give up eating animals, at least most of the time. Livestock production accounts for over 50 percent of greenhouse gases on the planet! People are losing their homes because we can’t give up hamburgers.

I was reminded the population is growing at a staggering rate. We have to make as much food in the next 40 years as we did in the last thousand. Urban farming will never solve this problem, there are too many people and not resources in urban areas. At one panel I went to an engineer said that vertical farming was a pipe dream, an idea that is perpetuated by cool graphics. I learned that the poorest people in the world are farmers and that 50 percent of them go hungry while the urban farm movement here in the US encourages this as the only possible direction. I’m not saying urban farming doesn’t have a place, I love going to the farmer’s market and I grow kale in my backyard but it will never be enough to make a global difference.  Especially when it comes to animal “farming”. Raising animals for food takes infinitely more resources. If people could happily live on subsistence farming those same people wouldn’t be cutting down the rainforrest to make way for cash crops that feed animals. The model of grass fed cows will never work to feed our growing population. As long as people are eating meat at the rate we do there will be factory farms and ag sprawl which is much worse for the environment than urban sprawl.

The only way we have a chance to continue life as we know it is eat a lot less meat. Most people on the planet have to go vegan most of the time. The sooner we stop being so selfish about our traditions and tastes the sooner we will be able actually start saving the planet instead of just deluding ourselves that someone else will come and save us.

The biggest threat to the planet is business as usual.

The green posole Viva Vegan is probably our most used recipe in the book, and I have tried almost everything from Terry Hope Romero‘s guide to Latin cuisine. It is made with tomatillos, her white seitan, and swiss chard all nicely thickened with toasted pepitas and hominey.

It is a delicious stew that we have eaten many times but last night Dan asked me what makes posole a posole. I guessed that it had something to do with hominey or corn but went off to wikipedia to look it up and learned that, while that’s true, it is often made with animal flesh, traditionally human flesh!

I guess the ancient Aztecs believed the gods made humans out of masa and they made posole for special occasions. They would remove the heart out of a criminal and offer that to the gods and mix up the rest of the body with some corn and serve it to everyone in town. Tradition! Eventually cannibalism was banned and Spanish priests switched the staple meat to pork because it “tasted very similar”.

As a vegan I get into a lot of stupid arguments that I would rather not be involved in. I mean, when people want to talk about veganism with genuine curiosity that’s fine, we can talk about it all day if you want. But, instead, veganism often brings out the real life troll in some people who just want to invalidate your morals or ethics or choice in whatever in any way they can. These people live to annoy and I try to avoid getting into conversations with them at all costs.

A few weeks ago I got into two different unwanted and almost simultaneous debates about traditional food definitions. I was wondering why no one in Austin made vegan barbecue and somebody replied, because there is no such thing as vegan barbecue. Sorry Homegrown Smoker, you don’t exist! It’s all a lie! I’ve never eaten your delicious smokey soy curls or enjoyed your barbecued tempeh. THAT NEVER HAPPENED, Meanwhile, I had someone insisting on blog post about Arlo’s delicious bacon cheeze burgers that calling a veggie burger a burger was incorrect. The funny thing about that was that he could have easily made that point about the bacon but instead he chose the burger. I tried to calmly explain that a hamburger is made of meat but a burger is just about anything in patty form but he insisted I was incorrect, even after I busted out the dictionary definition!

In both cases the troll tried to use the framework of “tradition” to make their argument but, the thing is, food changes all the time! That is why people like to talk about it. I mean, I understand liking things the way they are, the first time I made my Baba’s soup for a group of people one (possibly) well meaning guest immediately said, “this would be better with garlic”. I was confused because I was trying to make a recipe not improve upon it. But, that is what people do; they change things to the way they like them they or to use ingredients that they have easy access to or take the gluten out if they have celiac disease or, in my case replace the animal products so I can happily enjoy it.

The next time someone tries to denigrate my life choices and tells me that whatever I am eating isn’t real because it’s not traditional I can’t wait to tell them about the Aztecs and human flesh and how humans taste just like pigs.