I’m pretty sure Chicago has the most meaty vegan food of any town in the Union. I love it. This time I was back for my sister’s wedding reception. In between getting ready for the Skup Svatova (our Serbian bridal pre-party) and catching up with tons of family I still managed to squeeze in tons of tasty vegan food. I started the trip on a rough note, there were storms at O’hare and my plane was 16 hours late getting there. After spending 8 hours on the plane I thought it couldn’t get worse, until I saw all the folks passed out and set up like a refugee camp in the terminal at 4 am. I’ve been there before. I was so happy I was able to sleep in a bed. 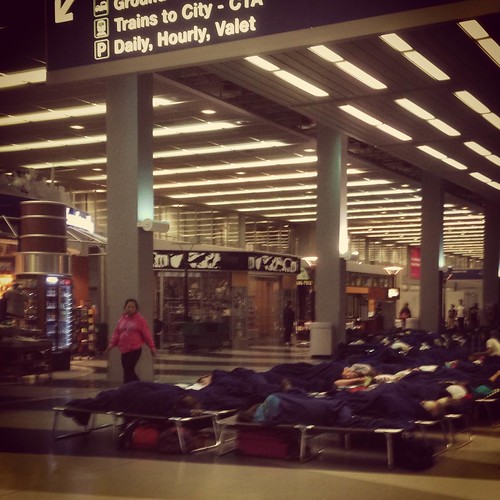 The next day I woke up starved and headed straight for Native Foods because my sister had told me that they had a muffalata on special. As a life-long olive fanatic the muffalata has long been my favorite sandwich and I was sad they didn’t have any vegan versions in New Orleans! It was great but probably not quite as good as the one you can get here in Austin at Unity Vegan Kitchen. The best part was when the waiter asked if I wanted ranch dressing for my fries, I used to love that and it was so nice to just say yes since Native Foods is 100% vegan. Their Italian seitan was delicious and thinly sliced, I think it just didn’t have the sheer number of olives that I require. 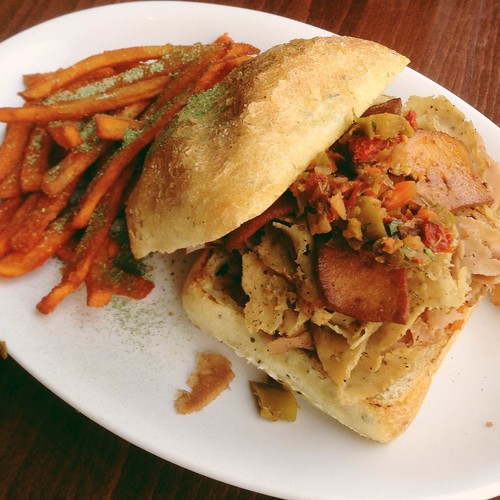 Later that night I had another Italian sandwich at Santullo’s that was really good too! Wicker Park has gotten ridiculously vegan friendly in the last 5 years or so. It’s such a big difference from when it was just Sultan’s Market, now you can eat just about anywhere and have several awesome vegan choices. When my friends Sandra and Adrian got in the next day Sandra wanted to go directly to Handlebar and so we did. I got the Pepita Tofu Scramble which had fried onions on top and actual green vegetables. I also had a beermosa! 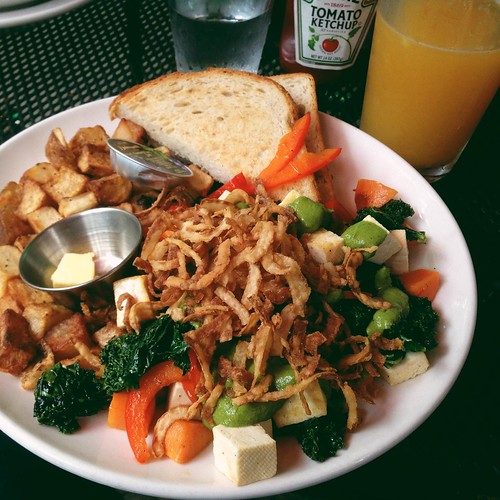 The best part about this trip to Handlebar was that they had tons of amazing Star Trek Art up on the walls. 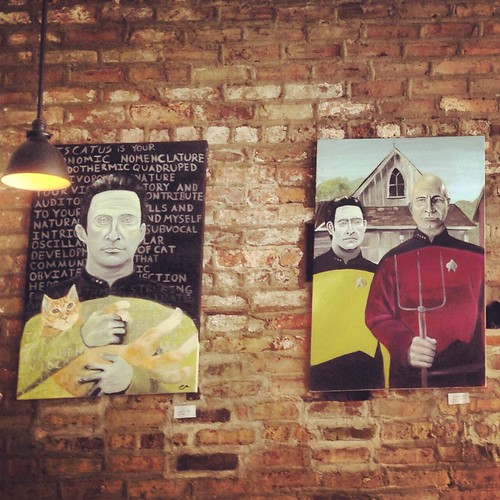 Later we went down to the Wormhole for coffee. I was sad that I missed the vegan doughnuts again but happy to show Adrian all their 80s memorabilia. 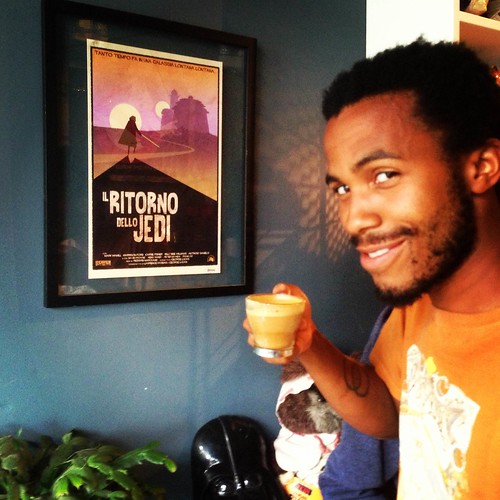 For a wedding present, Sandra, Adrian, and I decided to make cupcakes for the reception. I don’t think I’ve ever even double batched cupcakes and this time I made 141! We made Golden Vanilla with a fresh blueberry topping and Pineapple Right-side Up Cupcakes, both from Vegan Cupcakes take over the World. They were a hit! 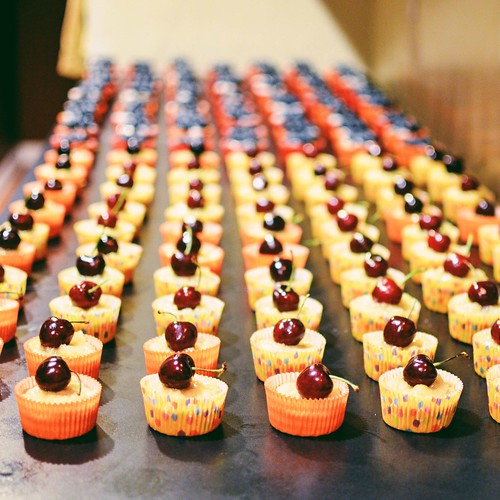 After a long night of baking I was so pleased that there were ton’s of places still open to eat. We set out for Dimo’s pizza since I read they had a vegan option. I had no idea though, that their vegan options were going to be so over the top! When I asked what slices were available and they told me BBQ chicken, Philly Cheesesteak, and several others I couldn’t believe it! Chicago is amazing! My BBQ pizza even had french fries on it! 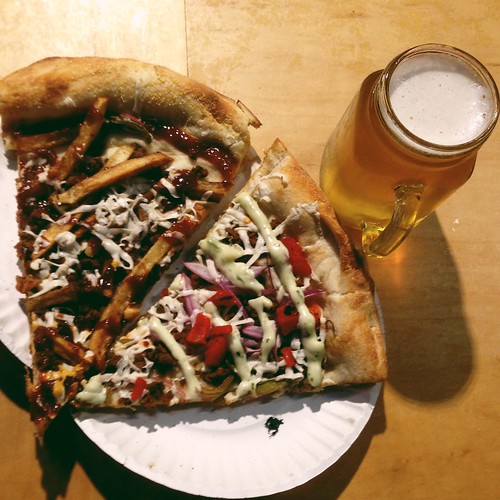 We ended up getting a hotel in Greektown and I was surprised to find that Karen’s on Green was right around the corner. The next afternoon we headed there for brunch and I was pretty excited to order Belgian Waffle sliders that had tofu eggs, seitan bacon, and almond cheese. I wanted the waffle to be a little crispier and the home fries were too oily but other than that it was a great sandwich. Their tofu egg is amazing, it’s not at all like a scramble. I wonder how they make it. 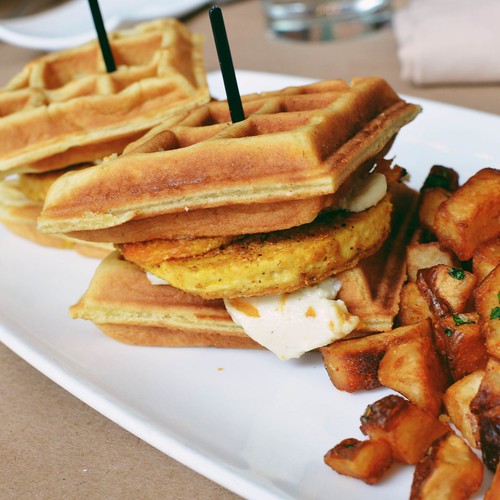 The reception was crazy fun. We danced all night and Sandra learned how to do the traditional Serbian Kolo dance. I was up way too late and so hungry by the time we got to my all-time favorite restaurant, the Chicago Diner, for brunch. When I saw they had chicken and waffles on the menu, served with peaches, I couldn’t resist! In fact, I don’t think I considered resisting. It was so freaking fantastic. I did wonder if I could also have a milkshake and decided against it. 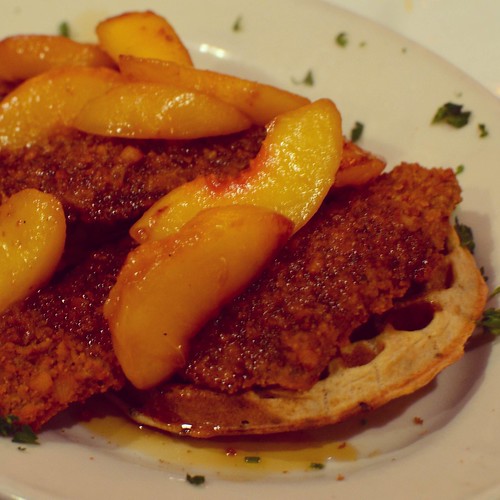 After that I don’t think I needed to eat again the rest of the day but I grabbed a Upton’s Sandwich at the Go Grocer for the trip home. The Leftover wasn’t as good as the Aurora but I was sure glad I had it! I wish some of our awesome Austin places would stock the grocery stores with sandwiches, mac & cheese, and BBQ like they do in Chicago. It’s so nice when you are in hurry. 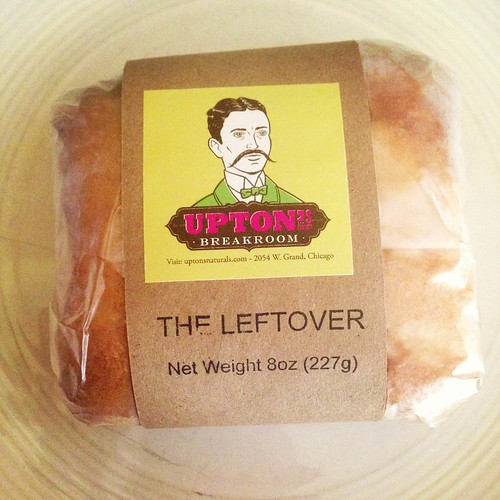 I’ll be back up there next month for my cousin’s wedding so I think by the end of the summer I’ll get to try every single Upton’s sandwich. Maybe I’ll even make it to the breakroom, I have to try the Elvis which has Bacon Seitan with sunbutter and grilled banana on multigrain bread.