My sister decided to get married in New Orleans on April 19, 2014 and I have been excitedly planning the trip there for months. I’m sad it’s already over, we had danced until the sun came up. As usual I tried to pack in as much vegan cuisine as possible in between wedding obligations and my oh my, New Orleans did not disappoint! My first stop in planning was the amazing blog New Orleans in Green by Melissa Bastian who has categorized every vegan option in NOLA and even has a map! It’s like she’s my New Orleans blogging counterpart! She gave me a ton of recommendations as well based on where we were staying on Canal. We drove to New Orleans from Austin and ended up getting in after midnight so we headed out to a bar called 13 that serves food super late. When I opened my menu I couldn’t believe my eyes, they serve vegan chili totchos! It was super dark so I have terrible picks, but I had to show you because who knew totchos were something you could buy in the real world? It’s the ideal bar food imo. 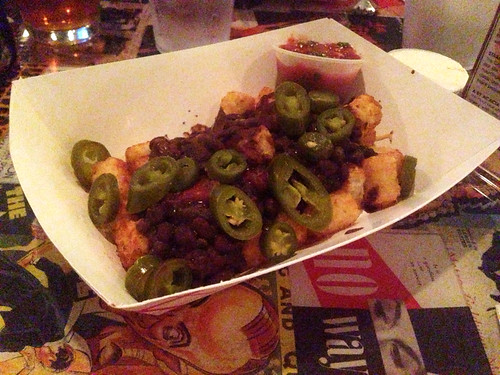 I wanted to try the po’boy but I couldn’t resist the bahn mi which ended up being fabulous with crusty bread, fresh veggies, and vegan mayo. 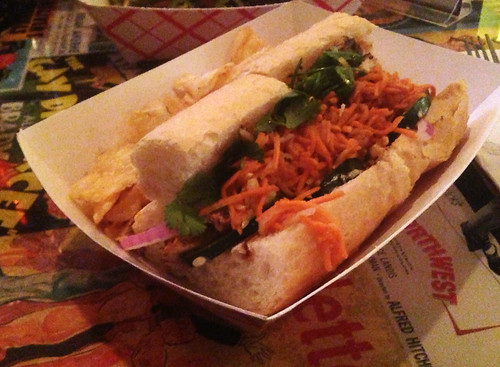 From reading New Orleans in Green  Breads on Oak became my number-one can’t-miss spot so we headed uptown first thing in the morning. 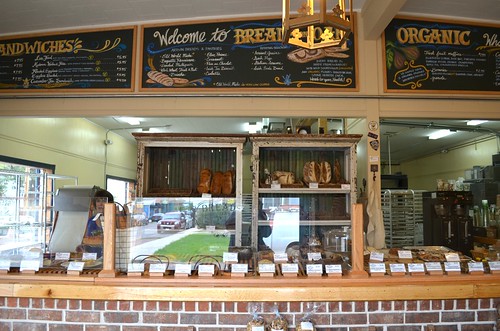 Although it isn’t even an all vegan bakery, they had more vegan options than just about any vegan bakery I have been too. I raced back and forth from one end of the bakery case to the other trying to decide what to order. Everyone working behind the counter was so nice even though I kept changing my order every five seconds.  In New Orleans you have to have cafe au lait so I started with that and a chocolate ganache tart and took it to their little back courtyard. It was just as rich and delicious as it looks. 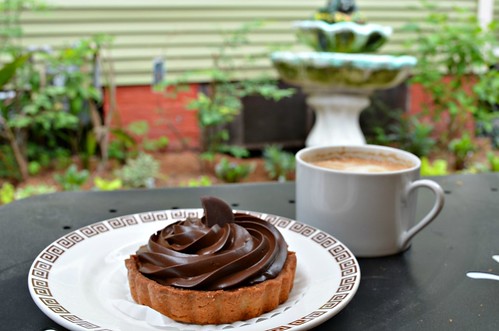 We also sampled the cashew ricotta tomato pie which was so perfectly delicious. Everywhere I went in New Orleans had fantastic garden fresh tomatoes somehow. I don’t understand it all because we haven’t hit tomato season in Austin yet and we aren’t that far away. Where do you get your tomatoes New Orleans? I want them! 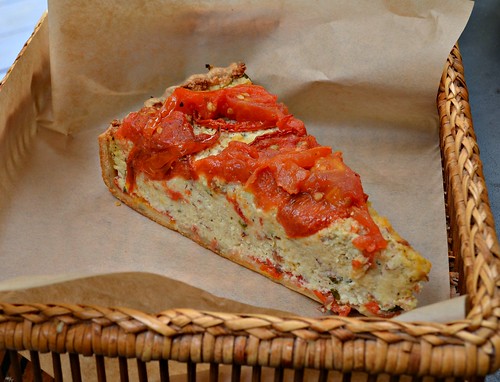 The tart was incredibly delicious with it’s beautiful tomatoes, rich interior, and flaky crust but I have to say, the pumpkin cheddar breakfast sandwich was somehow even better. 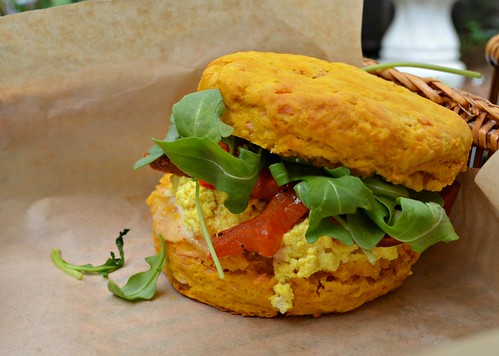 It didn’t look that exciting in the bakery case, but this was one of the best breakfast sandwiches I have ever had. The biscuit itself was kind of like a scone that could have been eaten it’s own but instead it was filled with marinated tomatoes, fresh greens, a perfectly seasoned tofu scramble, and some sausage too. Dare I say it was better than a breakfast taco? We also ordered some olive bread and peanut butter blondies to take back to the room and everything was perfect. I swore I would come back to Breads on Oak every day but there were still so many places to try! We tried to walk off our giant brunch by touring around the garden district and were so starstruck when we passed Neil deGrasse Tyson on the street on a guided tour! 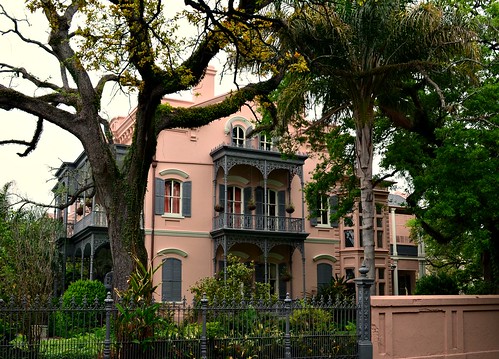 Later I went to my sister’s bachelorette party which started at Bacchanal Wine which is a combination wine store and lounge with foodie type cocktails and dishes. I tried the Pinky Tuscadero which had Rose’, Orange Bitters, and Champagne. 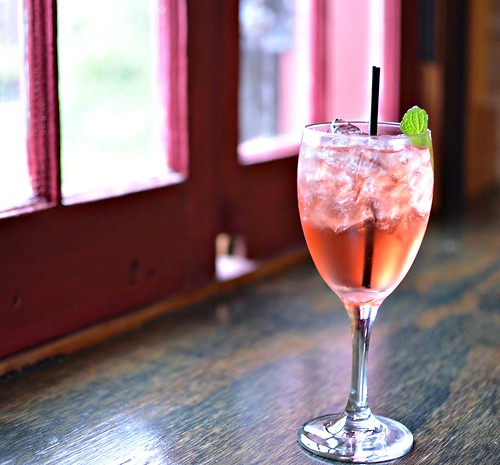 They also veganized their fresh bucatini dish for me which had cauliflower, Swiss chard, sofrito, & breadcrumbs. It was a little spicy and totally delicious. I split it with my aunt who isn’t too keen on vegan food and she really loved it so it was a double win! 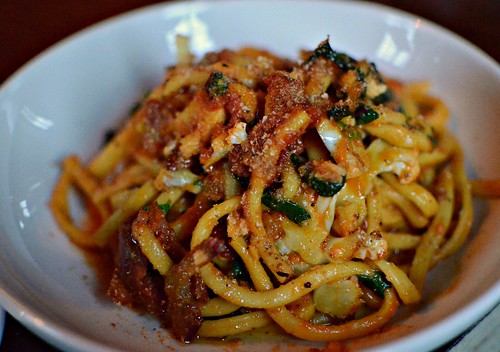 Later my Mom flew in to town and so we stopped at a little tropical influenced cafe called Carmo. Everything on the menu sounded fantastic so I asked the waiter for recommendations. He said their Japanese tofu dish was very special and so we all tried the Shio Koji (soft tofu fermented in fermented rice malt) with avocado stuffed with peanuts & an awesome tomato salad. The tofu was incredibly cheese-like because of all that fermentation and the avocado salad perfectly counterbalanced it since it was so bright and fresh. 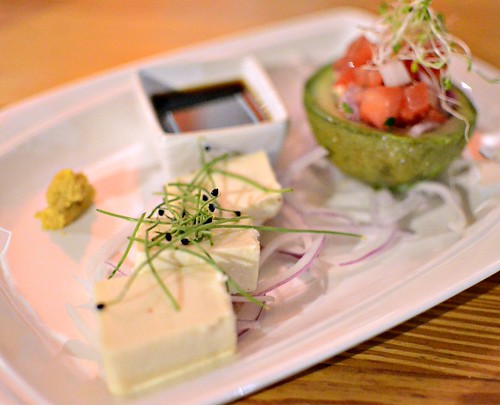 I also tried the Acarajé – black-eyed pea fritters with vatapá (a cashew peanut coconut paste) because I love Brazilian food and it’s tough to find vegan. The fritters were crunchy and the paste inside was very unique. I could have eaten these all day too. We also had banana bread pudding for dessert which was incredible. 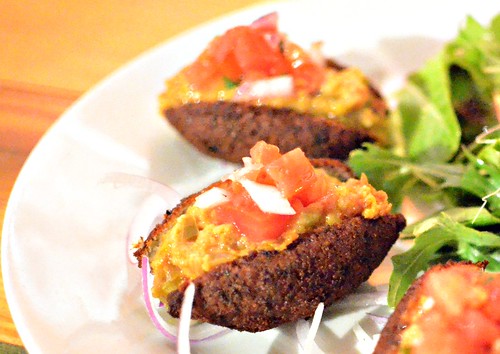 The next day we were very excited to try New Orleans’ newest plant-based restaurant Seed. 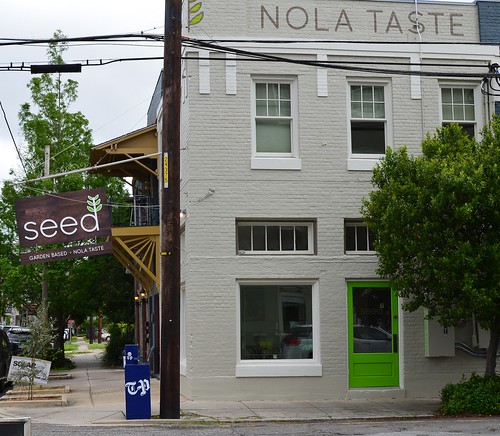 The inside was very eco-chic with reclaimed wood and a bright white interior. The menu was a combination of raw and comfort food and they do a separate terrific-sounding brunch. We started with the breads and spreads but they were out of so many of the spreads that I can’t remember what we ended up with. We liked the ranch style one the most but the hummus & carrot based ones were well done too. 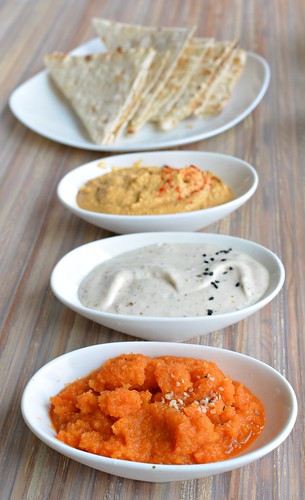 I was feeling a little under the weather so I thought a bowl of gumbo might bring my voice back. It was good, but not as good as this recipe which is how I do it lately. 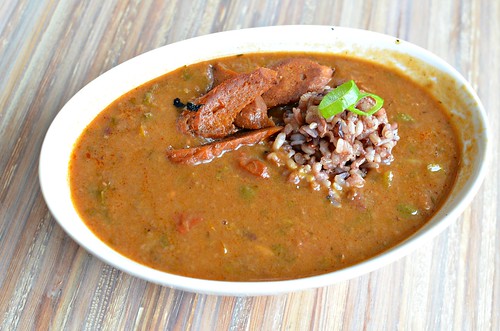 My partner got the Tofu Po’boy and I was jealous because it was so damned delicious with it’s golden chunks of fishy tofu, mayo, and crusty bread. I love that everywhere in New Orleans has good bread! I think it’s really rare here and I grew up eating homemade bread at almost every meal (along with every trip to church and every holiday). How did my mom do it? 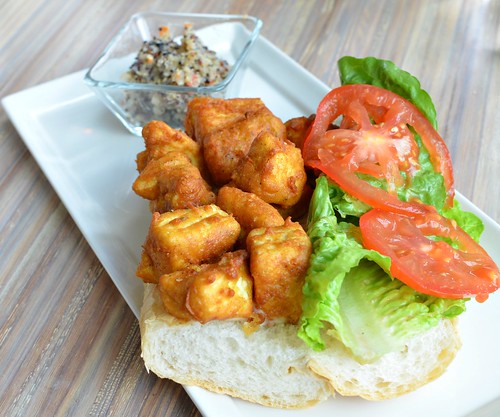 We also ended up sharing (sorry Dan!) the Mac and Cheese which was thick and creamy without being heavy or greasy as mac & cheese can be. 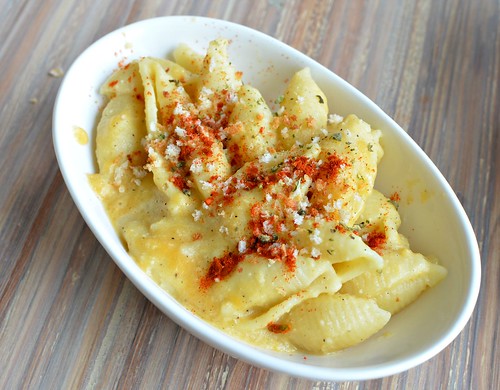 I really wanted to try the beignets for dessert but there was no way I could eat anymore food at that point. We wandered around the french quarter meeting up with friends and family after that until it was time for the rehearsal. 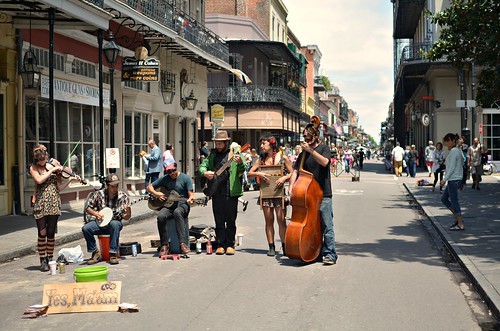 Later that night we skipped out on the rehearsal dinner at a clam place and took a long walk through the quarter to Feeling’s Cafe. It was so dark that pictures weren’t happening but I highly recommend a trip to Feelings if you make it to New Orleans and book a table in their beautiful little courtyard. They have a special vegan menu so we started with the vegan boudin, which is a popular sausage throughout Cajun Country. At Feelings they wrapped the sausage in a corn husk and I wondered if they steamed it that way. I am curious to try that as a foil alternative. It was filled with tofu and shitake mushrooms and I thought it was savory and delicious. 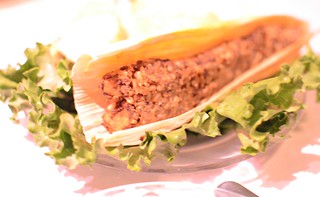 I ordered the Potato and Tempeh patties and Dan had the creamy walnut pasta. The latter was nothing special but the potato tempeh patties were outstanding. Dan couldn’t stop himself from eating them so I ended up giving him a whole patty. Sacrifice. 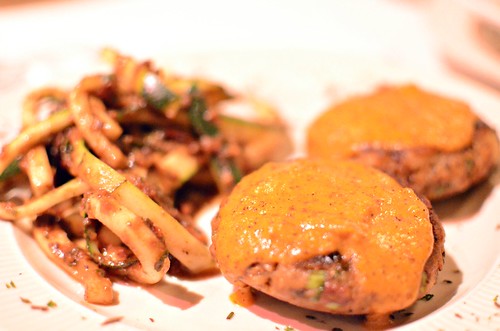 They were served with zucchini ribbons dressed with sundried tomatoes and olives.

The next day was the Wedding Day and it started with a planned meeting at Cafe du Monde, again thanks to NOiG I found a vegan friendly stand right there in the French Market serving vegan blueberry pancakes and smoothies called Meals from the Heart. I loved this little place, the ladies who ran the counter learned everyone’s name and called you by it throughout the meal, it was such a sweet touch! They were so friendly and the pancakes were some of the best I’ve ever had. They even had real maple syrup and homemade vegan butter. 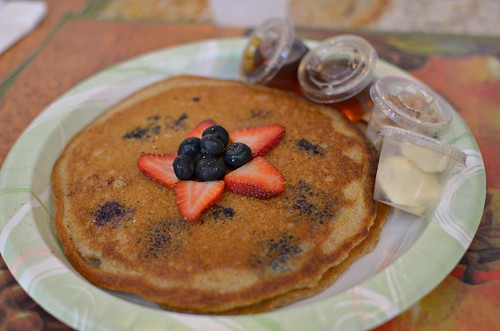 With my belly full of pancakes my sister and I sprinted through the French Quarter in search of a flower store that was no longer at the listed address as we prepared for the big event. 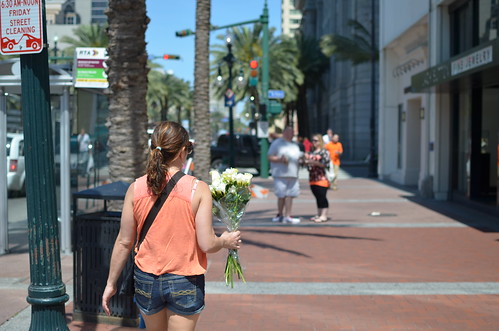 It was a whirlwind of activity getting ready for the wedding on the roof of the Ritz but everything went perfectly. It was so much fun. The next day everyone went to yet another seafood place but Dan and I headed uptown again to try some of the Vietnamese food that New Orleans is famous for. Jazmine Cafe was nice and cool and they had tons of fancy spring rolls filled with different things like seaweed or mango. I wanted to try them all and everything else on the menu but I stuck with a stir fry dish called Sweet Heat. If I lived in New Orleans this would be one of those places where it would be hard to sample all the items because I would just want to keep going back to this one. 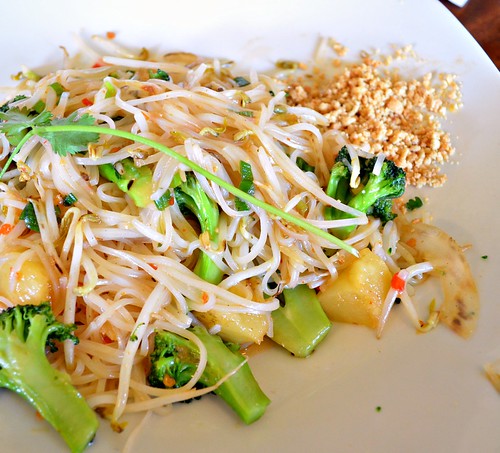 We headed back to the French Quarter to meet up with the family, and see the gay Easter parade. 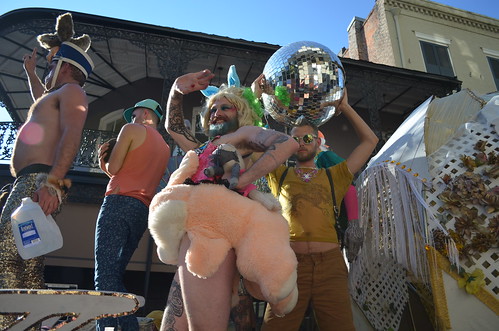 Again I was so impressed with all the different street performers everywhere. I don’t know how Austin can call itself the Live Music Capital of the World when New Orleans exists! There are brass bands playing at all hours and everyone is dancing everywhere. It was so hard to leave, I can’t wait to go back. Next time I want to rent a little house on Air B&B since so many of the ones I saw included bikes and New Orleans seems extremely bike-able since it is so flat. There are so many places I still want to try. It was a fantastic trip. 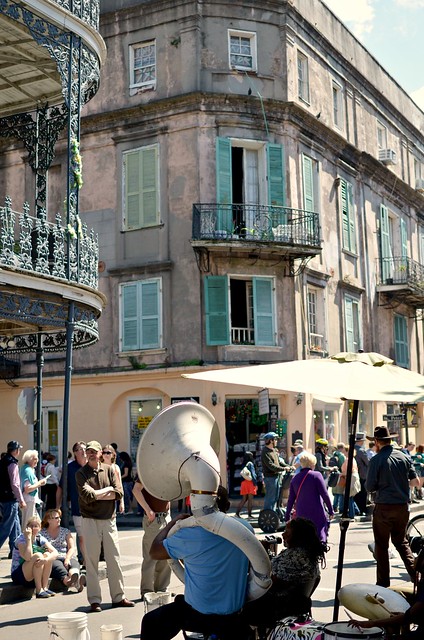