In Terry Hope Romero’s cookbook Viva Vegan I learned about Aji Amarillo peppers, I soon found it at Fiesta and it’s been a staple ever since. Fiesta has both the paste and the peppers but I have stuck with the paste because it’s just so dang easy to use. Aji amarillo is a pepper that is mostly used in Peruvian food where, as I understand, they use it in just about everything. It’s from the family Capsicum baccatum which is full of peppers we don’t use a lot here in the states. The only one I’m familiar with is the Peppadew. I have heard that this family is easier to grow here because we don’t have the same pests, ours go after bell peppers and jalapeno, but I didn’t have much luck this summer. Actually, none of my peppers grew so it probably had something to do with me and my inherent laziness.

The pepper paste is good in all sorts of things, one of my early favorites was coating tempeh in it and then grilling with it as I learned in Viva Vegan. But, adding a bit to anything that could use a bit of fruity, delicious, spiciness like corn chowder and salsas is great too. I learned that in Peru they use it in cheesy sauce and, truly, that is where it really shines. One of my all time favorite recipes is the Mac Daddy from Veganomicon and when I added some Aji to the sauce it really took the dish to the next level. Like, best thing I ever had level. Like, I can hardly even look at this picture because I can’t stand to remember how good it was. Other changes we made to the Mac Daddy is using miso instead of mustard, a bit of lime instead of lemon, adding more flour, and using panko on top in the final baking. In the picture below I actually used some old flour tortillas and it was just wonderful. 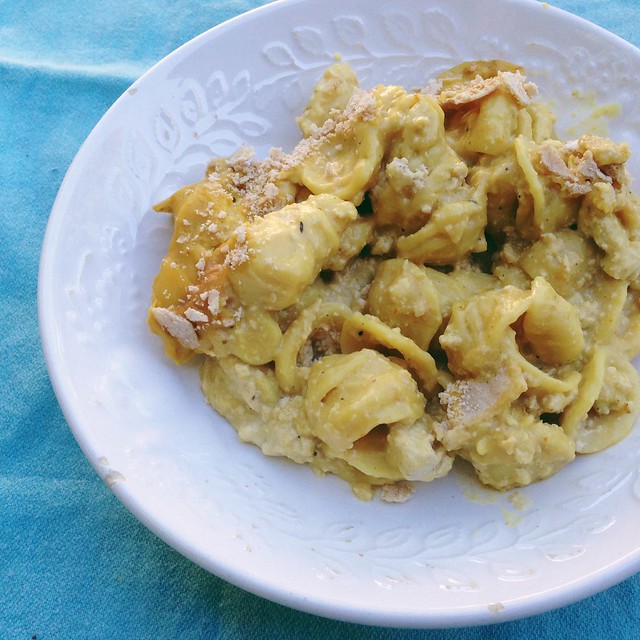 So if you see some around grab it and start experimenting. I bet it would be just wonderful in homemade queso.

My friend Krys asked what we would eat if it was our last day on earth. She said she would “fill up on a plate of Southern fried goodness: deep fried cajun spiced tofu, mashed taters w/gravy, fried okra, and corn on the cob. And of course dessert, something lemon”. I liked the sound of that! I immediatly thought of the meal Mr. Smurf made for us the other night, all recipes from the Veganomicon, Mac Daddy, smokey grilled tempeh, and delicious greens.

We ate it on the back porch after the sun had gone down, it was immaculate perfection. If it was my last meal, though, I said I would add BBQ black-eyed peas, tots,  olive poppers and a Michelada to drink. And some sort of decadent chocolate dessert that is, like, chocolate with chocolate surround by chocolate.

I wish this picture had turned out better because it is one of the funniest ways I ever saw the dogs sleep.

I had plans to make all sorts of fabulous food over the weekend but instead, Mr. Smurf ended up cooking for me. He said he would make whatever I wanted and for some reason I really wanted comfort food. Chickpea cutlets and mac daddy from the Veganomicon and broccoli were the name of the game with Oreos for dessert. It was very TV dinnerish which is exactly what I dreamed. I really want to find some TV dinner style trays that have the little compartments for when we eat like this. I love mac daddy, it is funny how there are so many different recipes for vegan mac and cheese and everyone has there favorite. I have tried so many and this one is my favorite!

Hope ya’ll had a fabulous weekend!