When it’s been summer for a while in Texas it’s hard to remember what it’s like everywhere else. “No pants” kind of becomes a way of life. To put it succinctly, I packed all wrong for my trip to the north starting with upstate New York. Swacket totally lied to me saying that I’d be comfortable in jeans and a hoodie when I would have been happier with snowpants and a heavier jacket than I own. I mean, it’s the end of May! Also, I never learn. The nice part about the change in temperature was that it was just the starting moments of spring and everything was in bloom. We got off the plane at Newark and made our way to Ethiopian food at Lalibela‘s as soon as was humanly possible.

We had such warm service and it was a cute place but even though there were more vegetarian options, I have to say I like the Ethiopian places in Austin better. Lately it seems like they have just been popping up everywhere. We must have at least five by my count.

We headed up to Hudson on what I thought would be a two hour car ride, 6 hours later found us checking in to our sweet Air B&B house and meeting with our friends to start celebrating the next days wedding which was to be at a beautiful spot right on the Hudson river.

In the morning we drove across the river, through the town of Rip Van Winkle, and onward to the Love Bites Cafe which I thought was particularly apropos on a wedding day. (PS, lately I have been totally overusing the word apropos. It’s really fun to say. PPS I always totally overuse the word totally even though I’m not an 1980s california valley girl. I totally don’t know where this comes from.) We arrived in Saugerties, an adorable town with a ridiculous name, and settled in for another very expensive meal. Why is everything in New York so expensive? I mean, I get it in the city but every place we went was pricey and nothing was Texas sized.

I got the sweet potato hash which was pretty rad, although I could have used more greens…and more potatoes.

We trucked back over the Hudson to Hudson to get ready and found the beautiful wedding spot.

Jen and Ian are so in love and I am so happy for them! If you live in New York and are interested in placenta encapsulation she is totally your girl. We had fun with masks and they had a delicious Mexican spread with tons and tons of vegan options so it didn’t end up mattering that my breakfast wasn’t lumberjack style.

The next day I had breakfast at Earth Foods and I still wish I could take it back. I know better than to order a tofu scramble that is described as having ginger, tamari, and sesame. Having tamari listed on the menu immediately signals that you are somewhere with a 1970s approach to veg food. Surely, you can put those items in a tofu scramble, but clueless restaurants try it, it’s always kind of… disappointing. Anyway we weren’t there for the food in the first place so I wasn’t even thinking of this as an “eat everything in sight trip” until my instagram friend Dianne reminded me that Lagusta’s Luscious was right on the way down to the city. Holy shit. The Motherland.

I instantly turned into a vegas style high roller and I said to Dan, get whatever you want it’s on me. It was overwhelming. They had baked goods.

And so many handmade chocolate truffles.

We got the chocolate pyramid, the apple carmel, the croissant infused carmel, the furious vulva and more.

I think the chocolate turtle was my favorite.

Lagusta is in New Paltz which seemed like a serious hippie town. But maybe that’s just because we went to Karma Road for lunch.

Imagine friendly dreadie types, quotes from the Dali Lama, pictures of farm animals, and magazines about the healing power of flowers, with the dead softly playing and you will have a good idea what this place is like. We were really confused about the ordering process and ended up with a smattering of warmed up deli food which ended up being ridiculously expensive but luckily VERY tasty.

Then it was onward ho to Manhattan to meet up with some old friends at a micro falafel place called Taïm. 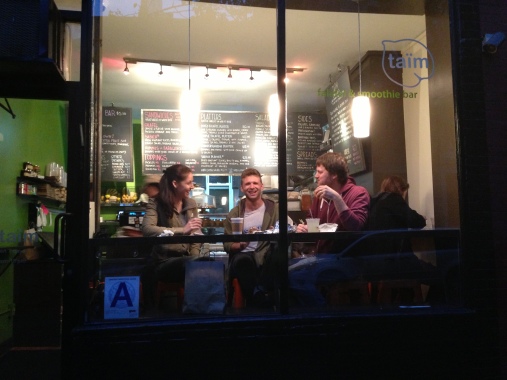 When I saw they had green olive falafel I think my heart skipped a beat. It was delicious.

We stayed the night with another friend in Brooklyn who took me to Bagel World in the morning. Bagels are one thing you just can’t really get in Texas so I was stoked for a New York bagel. When I saw the hand written sign; “this way to bagel paradise” with all the tofutti I knew I was in the right place.

I opted for scallion cream cheese on a poppy seed with olives aka what I would eat every single day of my life if I lived in New York. This blog would be about bagels then instead of breakfast tacos.

As much as I loved this bagel I’d rather be in Texas. Our food carts would never have a line like this.

That’s right, I went to the Cinnamon Snail, and after waiting in the line that seemed to last the better part of the day I learned that the cart was cash only and I only had seven dollars. In Austin this would be enough for a meal but in New York the best I could do was a couple of doughnuts. It all sounded so good. Maybe we can get them to drive down for Texas VegFest somehow? I doubt it, they probably make a killing. (not literally because they are so vegan) The doughnut was good and I was glad to have it on my cross country flight to Oregon which will be the next post. For now I will go back to enjoying New York on the screen.

I used to never really celebrate Valentine’s Day except to make a fancy dinner. Well, there was the one year that Dan bought be “The Bodyguard” which you should totally watch. Some would say it’s the greatest love story of our time.

Anyway, now that I am in my thirties I am totally digging all the girly things I never cared about before. I wonder why? Dan brought me flowers and a breakfast taco first thing in the morning! Best present ever!

I got fancy Lagusta truffles that have the craziest flavors. I had to try “the wild box”! So far my favorite was the chipotle carmelized onion. Who would have thought onion chocolate would be so great. Dan hated the shitake one though so that was sad. Next time I’ll go for something less wild. 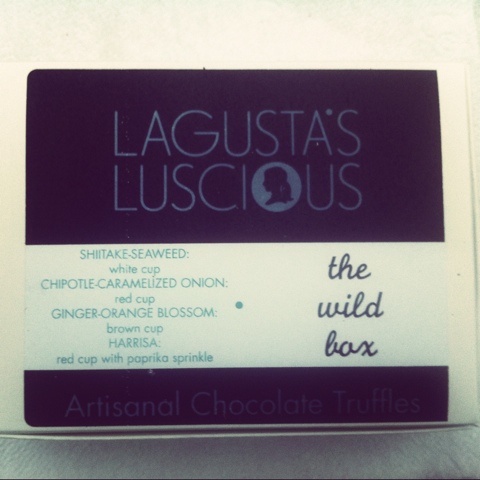 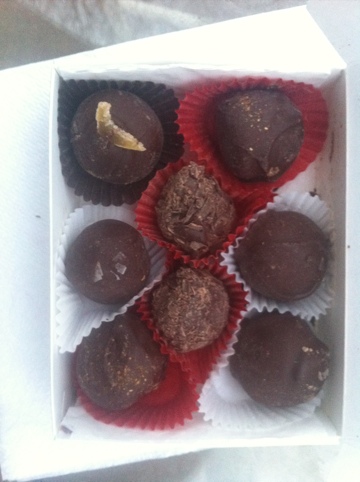 The intense chocolate hearts with dried cherry and black salt were truly amazing.

Even Dinger liked the flowers although he would have liked them better if they smelled like nooch. 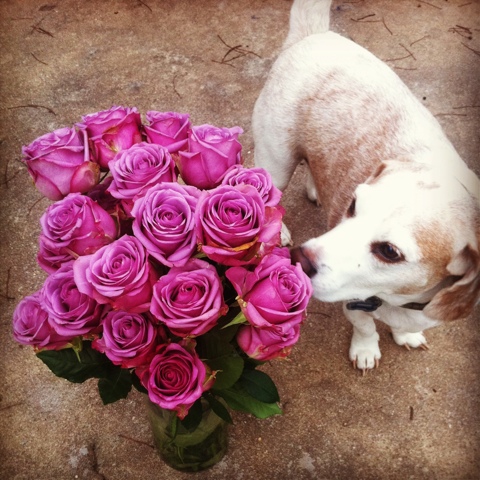 Then we got an adorable little red velvet cake from Sugar-Skull. 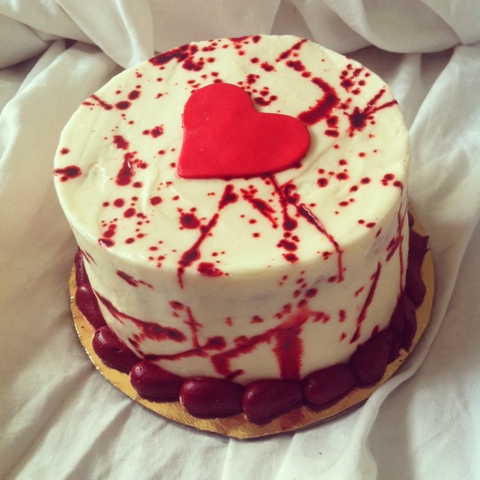 Now I am studying for a test (aka procrastinating by blogging about my pretty pink Valentine’s Day.

Hope you all had a great day!