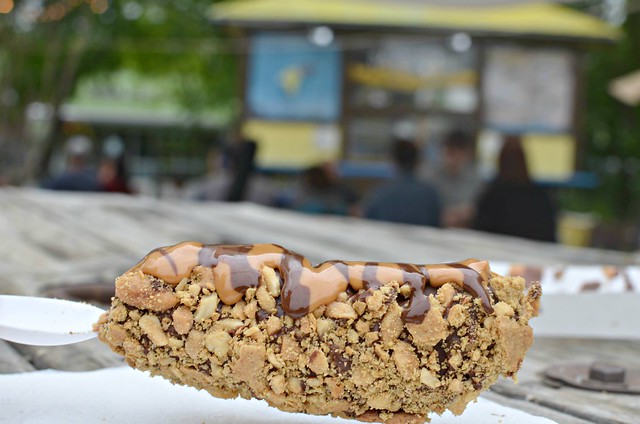 Last week, after I filled up on Venezuelan food at Four Brothers and did some shopping at Rabbit Food Vegan Grocery, I enjoyed the special at Bananarchy, “The Peanut Butter Pie Banana is hand-dipped in vegan chocolate, half topped in graham crackers, then drizzled with organic peanut butter and more chocolate” and thinking how lucky I was to live so close to a vegan friendly banana stand. If you are sad ’cause you live in Austin and can’t say the same thing help may be on the way. Bananarchy has a kickstarter going on to open a second banana stand in Austin. So go support it and add some banana love to your life. 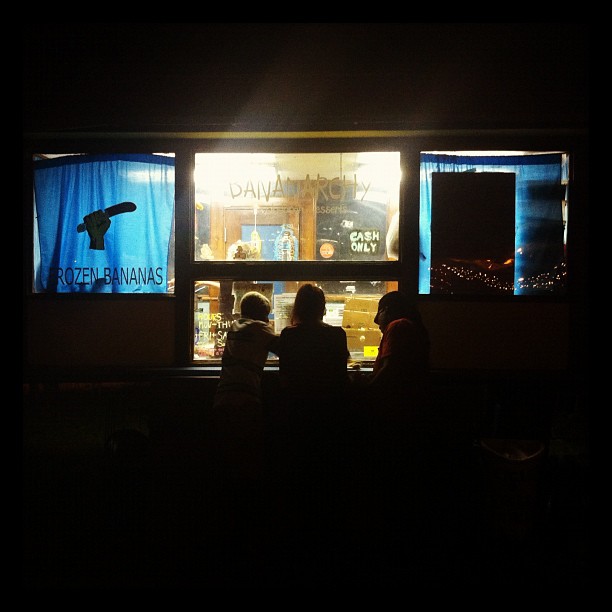 A while back one of my oldest friends told me she was starting a small cream puff business in Chicago called Puffs of Doom. When she told me she was going to have vegan cream puffs I was really excited and thought there would be a token puff I would one day get to try on a trip to my home state. I followed her new company on twitter and on the facebook and I watched her business grow and get recognition from all kinds of fancy foodie press, even the Today Show covered them! The many different kinds of vegan puffs all sounded unique and delicious, she has creamy chocolate ones and noochy savory ones like potato curry. Seeing the puffs filled me with longing but it wasn’t until last spring when my other friend was having a bridal shower that I finally got to try them.

I was blown away.

I started begging Becky to ship some out to me but she was only selling them at farmer’s markets and coffee shops in Chicago. Finally, this Valentine’s day it happened, I got a giant package of puffs in the mail.

I wanted to save them to eat with Dan when he got out of work late but I had to take photos while it was still light out… and then I couldn’t resist. I tried the Salted Caramel Chocolate Espresso and I had to close my eyes and let the world just stop. It was kind of like a cross between a Boston cream pie doughnut and a rich flaky croissant. The best of both worlds.

I thought, “I should really bring some to Kristen she would love these” quickly followed by “That would mean less puffs for me” and “I wonder how many I could eat before Dan noticed some were missing”. And they were his Valentine’s Day surprise!

The puffs brought out the worst in me!

And in Dan too. He tried them late when he got home from work and then, the next day told me to leave work early so we could eat them together. I mentioned our friend was coming for the weekend and he said “hide them!”. When I got home he told me I would love the chocolate peanut butter…and I did.

He said, “I didn’t think I’d like the Strawberry Champagne but it is amazing and has, like, a whole strawberry in there”… it does…

And the Oreo…oh the Oreo

We talked about joining the “puff of the month” club and knew that would never be enough. Maybe a Puff of the week club? We talked about moving to Chicago. Dan said they were the best dessert he ever had. And this kid loves his dessert more than just about anything.

I recommend you try them.

Or, maybe be better off for never having known true puffed out bliss.

I’d rather have the perfect moment.

Chicago, you win this round.

I don’t remember where I first saw a crêpe cake but I know it was on a vegan food blog and that I stared at it for a long time before filing it away in my brain only. The thing is, I love crêpes, I always have since I was a little kid. My mom would make them Serbian style (palačinke) and we would have them rolled up with my Baba’s homemade peach jam. It was the best thing in the world. The sad part was that my sister hated palačinke so my mom hardly ever made it. I guess that is why it has always been a favorite  forbidden fruit (forbidden crêpe). I love making them, I tried every recipe out there until Vegan Brunch came along and now I pretty much stick with that perfect recipe. Just a little tapioca starch makes all the difference.

I made crêpes for a friend last weekend with some rawtella and we were pretty excited with how it tasted so when I was charged with making a birthday cake I thought it would be fun to attempt the crêpe cake. I had some cashew cream in the fridge, cooked some fresh strawberries, and bought some Jason’s chocolate hazelnut spread to complete the layers. It was really fun to make but when I got to the top it was soooo ugly. My crêpes were all different sizes so they were really irregular and it looked like just a big pile of crêpes. I asked what to do on twitter and Kirsten told me to make nutella buttercream which was pretty much the best idea ever but would have required another trip to the store so I decided to just pour ganache over it.

Once the ganache was covering the cake I saw things had just came out looking even worse! Then by the morning it was all lumpy and textured and looked like an otherworldly landscape. I thought of covering it with more strawberries, which would have been the perfect solution, but instead I took the lazy way out and decided to just put an alien with a banjo on top and call it an alien cake.

I come from the planet Fuckyeah

It was really hard to take pictures of because everybody really wanted to try the cake but I snagged a few! It was maybe the greatest cake I have ever eaten. The dreamy hazelnut chocolate mixed with the creamy cashews and strawberries all sandwiched between layers and layers of crêpes was kind of indescribable. It tasted like something you would get at a fancy french bakery although it sure didn’t look like it came from one! The good thing about that was that everyone knew I didn’t buy it and when I later had to explain that it didn’t contain eggs, milk, or butter what was left of peoples minds was completely blown away… figuratively. It was a huge hit with everyone.

I can’t wait to make the next one now that I know what I am doing. I really like that I didn’t have to turn the oven on because it is already pretty hot and I loved how it tasted, it was a lot better than regular cake especially if you aren’t a huge sweets person or way into frosting. Also, chocolate and hazelnut is pretty much the best the best thing to put on crêpes in the world. Next time nutella buttercream.

I had no idea how easy it is to make homemade peanut butter cups until I saw some pics on design sponge and then read more on Martha Stewart. All you do is melt some chocolate, brush some into a cupcake wrapper, chill, add a peanut butter mix, and top with more melted chocolate and chill again. Both recipes mixed a bunch of sugar with their peanut butter and they also had some crispy element to add more texture. I didn’t want any crispy texture though, I wanted something more like a Reeses Peanut Butter Cup so I omitted that. Then I then had the inspiration to use Peanut Butter & Co’s White Chocolate Wonderful because it is sweet and unique tasting and already has sugar added so I could omit the mixing in sugar step. The result was the simplest decadent dessert I have ever made: no mixing, only one bowl, and I didn’t even have to turn the oven on or measure anything. Next time I think I will use more peanut butter and less chocolate, just barely covering the peanut butter on top.

They are really so amazing. I brought some to work for Valentine’s day and my coworker immediately said I should be selling them which I think I will try with the rest of my coworkers, “happy valentines day, I made you a treat 40 dollars please”.