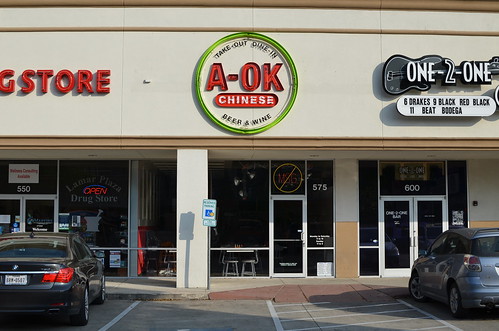 I hate writing bad reviews. I try to give a new place every chance. I don’t check out a restaurant until it’s been open a couple weeks (unless I just can’t help myself!) and then I try to go a couple of times with different people both vegan and omnivore. Even then in my review I always try and focus on the positive because I know not everyone likes the same kind of food and running a restaurant can be a real struggle. I was a waitress for many years and I know restaurants have bad days. But I can’t recommend A-OK Chinese at all, and judging from their yelp reviews I don’t think they will stay open that long unless they really retool their food.

At first I was really, really excited to have a Chinese restaurant in South Austin that focused on fresh local food, had craft beer, and was right between work and home, my favorite place for any new restaurant in Austin! When they told me that most of the dishes (with the exception of the Broccoli and Garlic) would be vegan if ordered with tofu I was sure it would become a go-to favorite. Currently, the only really vegan friendly Chinese that I eat at with any regularity in South Austin is Hao Hao which hits the spot for cornstarch heavy American Chinese food but isn’t a place I would recommend for a great meal but hey, they deliver. I thought A-OK would be the opposite with fresh Asian vegetables, light sauces, and then thick crusty tofu like you get at the best Chinese restaurants. Alas it wasn’t to be.

First, the interior is really cute, although it’s the fast-casual style where you wouldn’t want to linger. They have really nice decorative touches like stacked up cans from China and a giant photo from Nixon’s trip to China. You wait in line and order from the register. Or, in my case you order, then the cashier takes off to help someone else. Then you try and order again, and she stops you to give a to-go order to someone that just came in. Then you try to order a third time and she says “what” and you order again and then she repeats the order back to you all wrong. That it took four times for me to place my extremely simple order when it wasn’t busy at all (there was maybe three tables, no one behind me, and another cashier) was a bit dispiriting. If I was George Costanza I would have been sure she hated me. 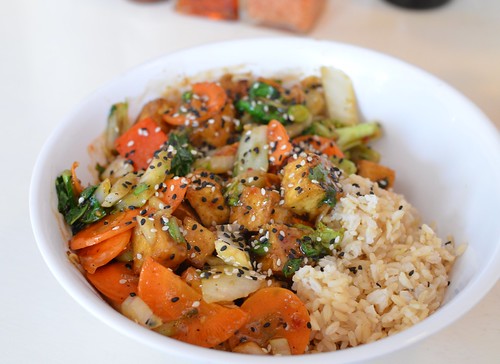 I ordered the Sesame Tofu and it quickly came out. It looked pretty good, but it was utterly tasteless. After a couple of bites I got up and grabbed every condiment they offer in an attempt to make it tasty but the food really couldn’t be saved. The rice was mushy. The tofu was completely bland, dried out, and pointless. I didn’t notice any spices, just an abundance of carrots which doesn’t work in this dish at all. Then when researching this post and looking at the menu again I see that on the menu online it’s titled Honey Sesame. So it’s not even vegan. URGH. 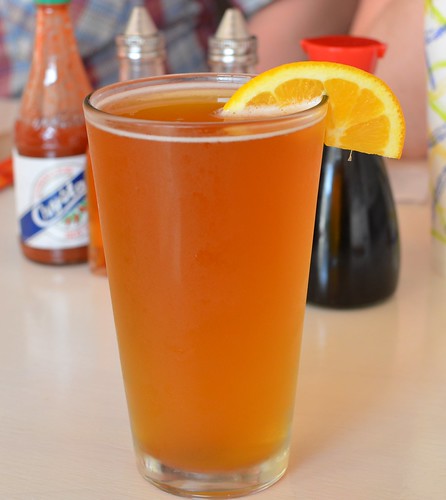 at least they knew to serve a hefeweizen with an orange

On another trip a few weeks later I tried the Orange Sweet & Sour which is usually my favorite dish and it was even worse than the Sesame, the orange sauce was just like straight up orange juice except it was also really bitter. I couldn’t finish my meal and saved the leftovers and then I couldn’t bring myself to eat those. Dan ordered the Kung Pao and was really disappointed too, he said it wasn’t spicy at all even though the menu would have you believe it’s very spicy.  I really don’t know what is going on at this restaurant. All four of my different dining companions were just as unsatisfied as me. Oh and the worst part was that it was considerably more expensive than your standard Chinese restaurant. I spent 20 dollars for a bowl the bowl above plus a beer and tip. Yikes! I’ll be sticking to Hao Hao for now. A-OK? No way.