I feel like maybe we have hit peak pizza in town so it’s time for a guide! Actually, there is plenty of room for more, get to it new Austinites from Italy, New York, New Haven, Chicago, and California! Check out Penny’s Portal if you need a list of vegan and gluten-free.

Lil Nonna’s – This trailer on the eastside at the Buzzmill has incredible New York style Pizzas and square Sicilian style pieces by the slice. They have housemade vegan cheeses and meats (omg the beetaroni) and spectacular seasonal specials like fig and homemade goat cheese or a Caprese with vegan fresh mozzarella slices, locally grown golden tomatoes, and watermelon balsamic vinaigrette. GF crust available. Delivery available from Amazon Prime Now or Favor.

Via 313 – What started as a trailer has now blossomed to an empire with restaurants and trailers all over town. This Detroit Style pizza is pretty much the love of my life. They use Follow Your Heart vegan cheese, and have a spicy tempeh on the menu along with the standard toppings. I love the trailer on Rainey street behind Craft Pride where you can sit on the patio and try out amazing Texas craft brews and the other one on the eastside at the Violet Crown, but the restaurants in Oak Hill and on the Drag have air conditioning and parking. And the no wait app!

The Parlor – Also on Guadalupe “Home of the first Vegan pie in Austin. Gourmet toppings made in-house by Austin Vegan Meats. Full bar, great wine, local craft brews, daily happy hours. Pinball machines, jukebox with everything from The Clash & Billy Holiday to Slayer & Jimi Hendrix. Outside shaded patio, and lots of indoor seating. Order at the bar, and seat yourself.”

True Food Kitchen – This California chain by Trader Joe’s downtown has some great vegan options but my favorite is the rotating seasonal pizza. There is only one choice at a time so check out the website, here is one from last fall with kale, cranberries, vegan goat cheese, sweet potatoes, & caramelized onions. 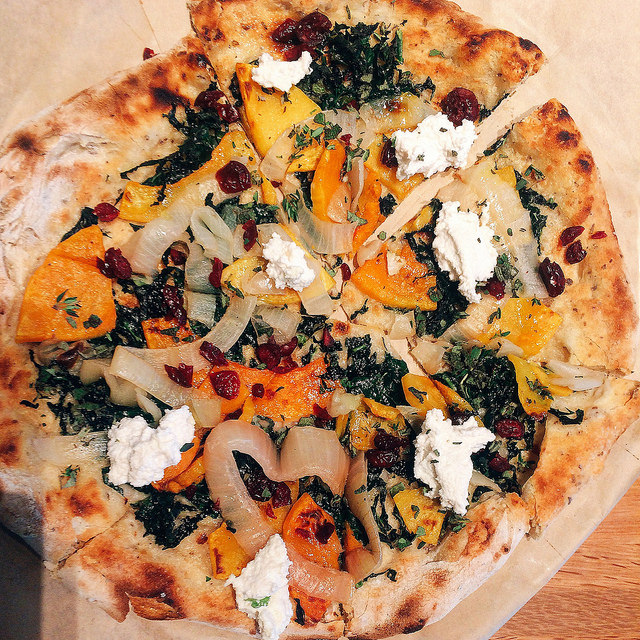 Counter Culture – If you are looking for creative vegan specials and a gluten free crust this vegan restaurant will not disappoint. They have a really tasty corn based crust and ever changing specials like Gumbo Pizza with local okra, zucchini, corn, blackened tempeh, setian sausage, and spicy aioli or brie and apple with spinach, fig sauce, and carmelized onions. Spaghetti squash and beet ball pizza below. Follow along on instagram to see what the weekly special is.

Promise Pizza – This spot in Round Rock was the first place I ever tried Daiya cheese way back in the day! They are still there serving up organic pizza to the north of Austin.

Conans Pizza – with locations all over town this is the place for late night delivery & daiya cheese lovers.

Brick Oven on 35th – This cute little Italian restaurant doesn’t have vegan meat or cheese but they have a nice little spicy vegan on the menu with chipotle pesto, tomatoes, bell peppers, onion, garlic, and jalapeno. 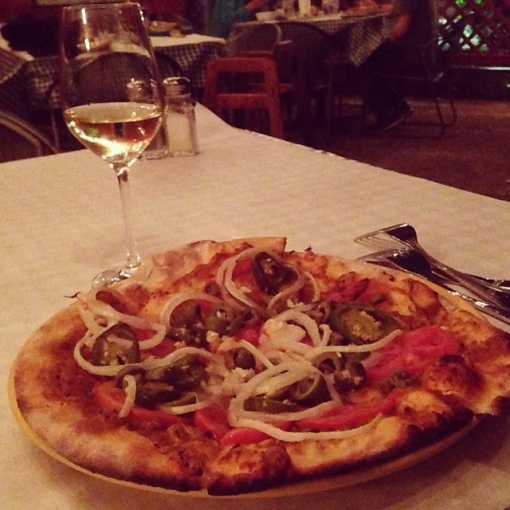 ZPizza– Several locations, the south is by the new Alamo at 5701 W. Slaughter Lane but there is one at 3300 Bee Caves Road, and one in Round Rock 200 University Blvd. This pizza place has Daiya cheese, vegan meat crumbles, and gluten free crusts available.

Austin’s Pizza 2324 Guadalupe (Multiple locations in every part of town) Follow your heart vegan cheese can be added to any pizza.

The Pizza Press 404 W 26th St. This California chain has Dayia cheese available and both the regular and gluten free crusts are vegan.

North Door Pizza – 502 Brushy St. Teese cheese is available for your hand tossed pizza at this venue on the eastside. They also have a GF crust. Late night mini pizzas until 3am on the Friday and Saturday.

Blaze Pizza Lakeline Commons  14009 N. Research Blvd. Vegan Cheese and toppings like spinach, zucchini, and artichokes. They also have all their nutritional information on their site so you can see all their crusts, including the GF one, is vegan.

Mellow Mushroom  2600 Interstate 35 Frontage Rd This chain has daiya cheese you can put in their pizzas and calzones along with tempeh and tofu for toppings.

PizzaRev– Vegan dough at this custom pizza spot has daiya cheese for $1 more and unlimited toppings.

MOD Pizza – This chain has spots in Mueller, Westlake, and on east Riverside. Create your own pie with dairy free cheese & tons of veggies. You can top it off with some sriracha or a bbq swirl

Pour House – 6701 Burnet Rd. Follow Your Heart vegan cheese isn’t on the menu but you can ask for it.

Whole Foods – Multiple locations. Their pizza by the slice usually has a vegan option. You can also buy whatever you want at the store and they will use it for toppings if you like.

Eastside Pies – Multiple locations. 1401 Rosewood Ave, 5312 Airport, 1809 1 W Anderson, The crust, both regular and GF and garlic knots are completely vegan. The bases are as well you can get hummus, black bean, marinara, spinach curry, tomatillo, chimichurri, or pesto even the special pestos are vegan! The only base that isn’t is the ricotta cheese. The breaded eggplant is not vegan but there is a wide range of fun toppings like sweet potatoes, avocado, Habañeros, and Spicy Slaw. Follow Your Heart cheese.

DoubleDave’s Pizzaworks at Arbor Trails on William Cannon has Daiya cheese but only at that chain location and it isn’t on the menu.

Turntable Eatery– 5111 Airpot Blvd They have a vegan specialty pizza on the menu: The M.C. has tomato sauce, vegan cheese, basil, oregano, and olive oil.

Other options with no cheese

Backspace 507 San Jacinto. Most of the antipasti like , chickpeas, tomato, onions, basil, oregano or spicy cauliflower, capers, calabrese, lemon are vegan and the pizza crust is vegan too at this classy brick oven pizza place and bar downtown. They have valet and are open until 11pm.

Home Slice– South Congress Pizza is vegan if you hold the cheese. Also the garlic knots.

Pieous– 12005 Hwy 290 W,  Brick oven pizza and salads at this pizza spot just outside of town. The marinara pizza is vegan & you can add veggies like Brussels Sprouts. South Austin Foodie has a review with pics of the menu.

Quezzas –  424 S Lamar Blvd. “Modern Mexican Pizza”. This food truck takes a go veggie stuffed quesadilla and tops it with more cheese, salsa verde, soy chorizo, and romaine lettuce but you can substitute whatever other vegetables you like.