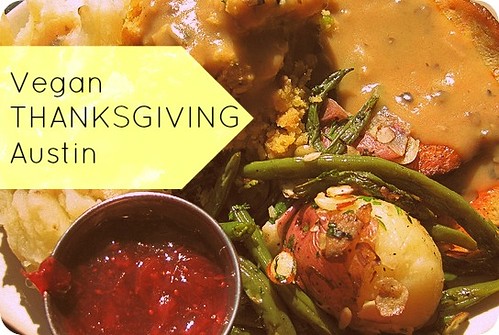 When I first went vegan I had originally planned to do it for the month of March…then I really liked it so I decided I’d keep it up… until Thanksgiving which has always been my most sacred holiday. I couldn’t imagine not celebrating the holiday with turkey and all the fixings. But, by the time Thanksgiving rolled around I had so many ideas I wanted to try out that I didn’t even consider making a bird and now I adopt turkeys from farm sanctuary every year. I love the holiday even more than in my pregan days! Lucky for me, so does most of vegan Austin and there are all sorts of ways to get your Thanksgiving fix in even if you don’t cook. (If you do cook, check out my pinterest board of favorite recipes)

First off, Wheatsville has been putting stuffed tofurkey, mashed potatoes, mushroom gravy, stuffing, mac and cheese and more on the hot bar every Wednesday for a few weeks now and will continue through the holiday. They are also the best place to buy a manufactured roast since they have Gardien, Tofurkey, Field Roast, and more in stock along with everything else you need from Brussels Sprouts to their awesome cranberry sauce made in the deli. You can order a whole feast, including vegan cheeseballs and pie! 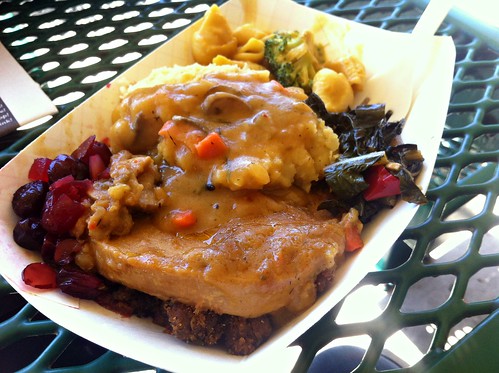 Over at Counter Culture you can pick up the ridiculously delicious Thanksgiving sandwich which is on special through the 26th. If you are going somewhere that isn’t vegan friendly and you want to just pick up a meal to take with you Counter Culture has a great deal for 16 bucks, they will pack up a vegan feast including Seitan Roast & Gravy, Green Bean Casserole, for you and you just have to warm it up. They also have a Gluten free option so make sure you order it ahead of time.

If you want to pick up an entire feast for your whole family to enjoy there are a couple of options. Inge, the Happy Vegan Baker has a full catering feast menu that includes a roasted root vegetable pot pie or a GF Acorn Squash stuffed with Wild Rice and cranberries along with Sage and Apricot Cornbread Stuffing and all the other accouterments. You can order for just one person or several.

A newcomer to the atxvegan scene Seed Catering, has a beautiful looking spread that you can order for as many people as you like. It includes a cranberry glazed lentil loaf and butternut squash mac and cheese. I want to try it all!

Every year on Thanksgiving Eve Mr. Natural puts together a full spread with their homemade roast, which you can also buy from them. If you know that you are going to struggle on the holiday playing defensive ominvore bingo it make sense to meet up with some like minded vegans the night before so the Austin Vegan & Vegetarian Association and Vegans Rock Austin traditionally throw a meet-up at Mr. Natural and this year is no different. They will be meeting up at both locations so you can go to either one!

This year BBQ Revolution is celebrating their two year anniversary with a Thanksgiving Party on November 21st. They will be serving vegan “turkey” with Cranberry sauce , Dressing, Mashed Potatoes, Mac N Cheese, Greens and some relish options. They are also preparing Thanksgiving meals. You can put in an order at the trailer or at Rabbit Food Grocery.

Bistro Vonish will also be preparing thanksgiving meals for pick up. The order form is online and you can choose from Seitan Cutlets, GF Garbanzo cutlets, Pumpkin Pie Kolaches and more. Check it out here.

Finally, it would be Thanksgiving without pie and though almost everyone I mentioned serves pie I’m partial to Capital City Bakery because it’s my tradition now to always pick up a pie from there. I’ll be having a hard time, again, choosing between Pumpkin, Sweet Potato and whatever else she has going on.

Let me know if I missed anything and I’ll add it here!