I was cruising up South First a few weeks ago and almost stopped short when I saw that there was a new Venezuelan trailer setting up. When I wrote to Four Brothers on twitter and found out they were going to have vegan arepas stuffed with black beans, fried sweet plantains, tomato, and avocado I knew I’d be happy since that is one of my most favorite combinations. They also said the Mandocas (fried sweet corn fritters) would be vegan without the cheese and I could make a vegan patacone sandwich with the same arepa fillings. When I got to the trailer and saw that Arepa Vegana was on the menu and I wouldn’t have to make any substitutions I was thrilled. 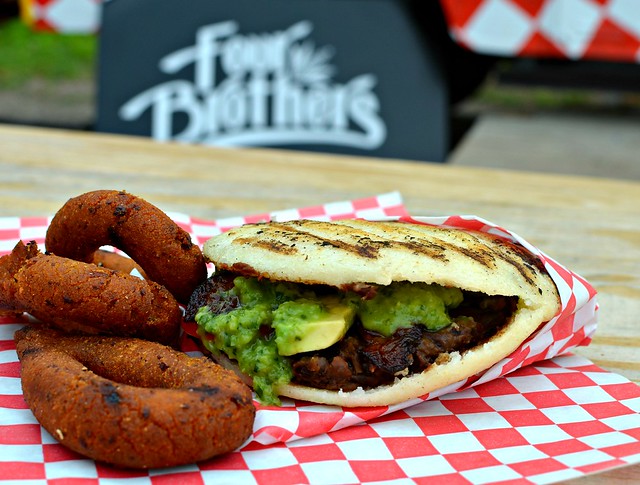 When I got my arepa I was even more thrilled! I had never had Mandocas before, they were sweet and delicious and I could eat them every day. The arepa was just as good as I hoped. I wanted another one immediately but I knew that was a bad idea and sure enough, after the food hit my belly I didn’t need to eat again any time soon. But I’m going back soon. It’s the perfect place to stop since it’s right across the street from Rabbit Food Grocery and Bananarchy. You can do your shopping, pick up some CDs at End of an Ear, eat some tasty Venezuelan food, and then pick up a frozen banana on a stick. The perfect South First dinner! Note that they open at 5 pm and are closed Wednesdays.