I had a hard time coming up with how to phrase the cuisine at the Golden Spike Rail Cart until I read them use the phrase “elevated stoner food”. For me that nailed the all vegan east meets west menu that has everything from Asian BBQ to Sausage and Waffle eggrolls. Plus, it’s a very different looking cart in the Buzzmill porch set between giant jenga games and a campfire. 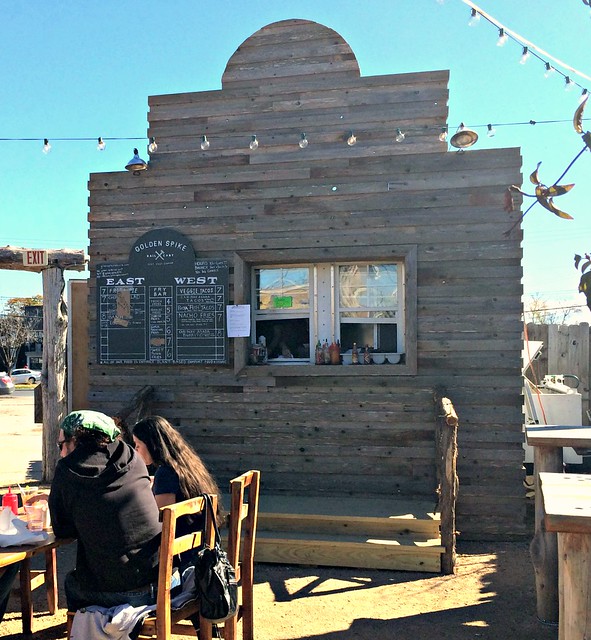 I had a tough time getting a handle on the menu because it was different every time I went and it’s not posted on the website. Now I know to check Facebook ’cause they change the menu seasonally, have different weekly specials, have only brunch on the weekends (though sometimes they will make you items off the main menu if you they have it), and they sometimes run out of things. The good news is, that even though I never got whatever I planned to try I think I loved every single dish I did try. My favorite was their bahn mi sandwich special a few weeks ago. Not many places in Austin do a bahn mi with seitan and this one was just perfectly cooked with lemongrass and thinly sliced just like I like it. The vegetables were fresh and popping with flavor and the toasted baguette and vegan mayo perfected the combo. 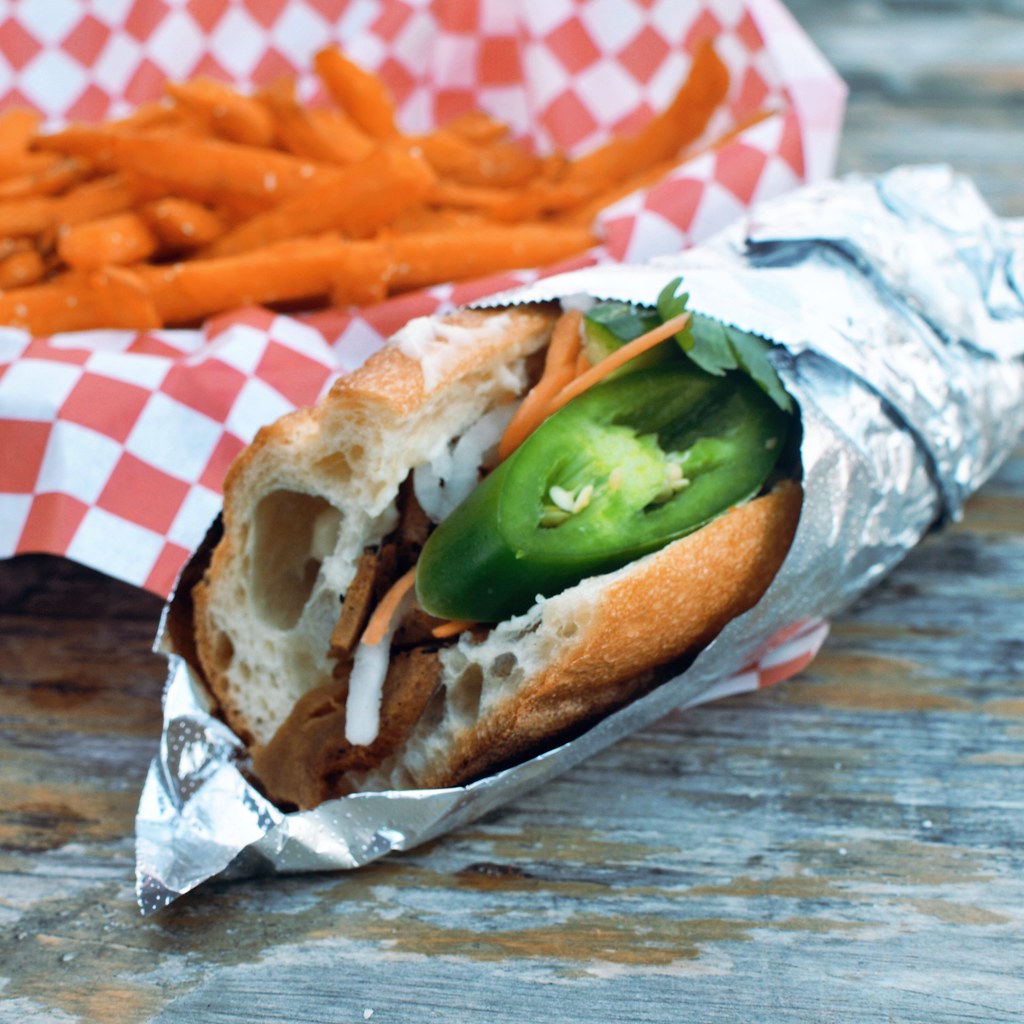 See those sweet potato fries in the background? That’s one of the most awesome parts about the Golden Spike if you are a french fry lover (and really what  human isn’t). They have a fry bar with all kinds of toppings like their perfect homemade parmesan, garlic, and even the ultimate late night bar food, nacho fries. 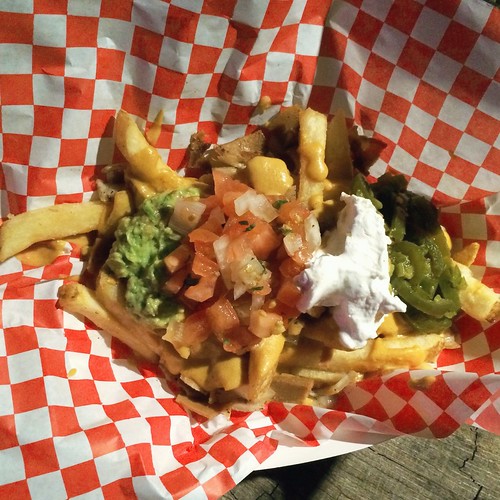 I love the Car-Nay asada that they use in the fries, and I get to LOL at the vegan spelling. Veganizing words is one of the more fun parts of veganism, as in, “I love when foods are noochtastic” or “who stole my tofeggs?”. So I don’t know why they didn’t go with the obvious Phish Tacos for their Baja “fish” Tacos. They are probably a bunch of haters since the Buzzmill is a super hipster bar but if you are serving “elevated stoner food” you may as well cater to that demographic imo. REGARDLESS the “fish” taco was delicious. I believe they use the new Gardein fish filets which make my mouth so very happy. 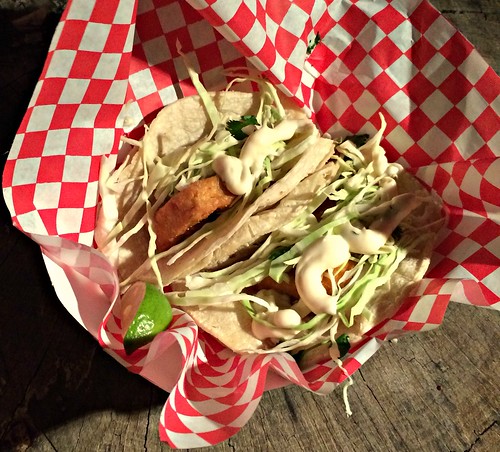 I also tried brunch on another day, I couldn’t resist the breakfast burrito even though I am usually more of a breakfast taco kinda gal. It was so tasty, I loved their seasoned tofu scramble and they give you the option of smothering it in cheese, guacamole, pico, and sour cream. 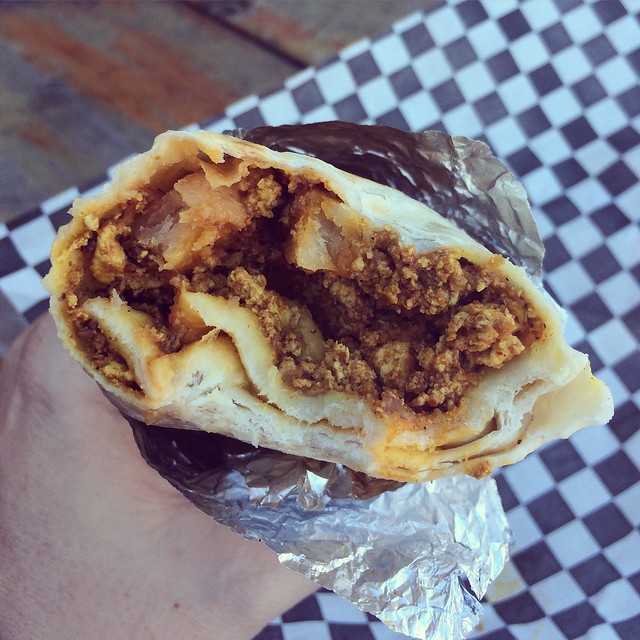 I need to go back to try the waffle and sausage eggroll which is two eggrolls stuffed with breakfast sausage, house made waffles, and a maple dipper. It’s the perfect good weather brunch spot because the Buzzmill does a vegan bloody mary bar where you can add six thousand olives if you’re me. Speaking of the Buzzmill, it is a logger themed place so they have some serious animal taxidermy going on inside which some vegans find very disturbing. For some reason I don’t get upset by the big bear and yet if it was a bear skin run I would run far far away. To each his own, I guess, but I thought I’d give you fair warning. Maybe I don’t mind it because it looks like a place in Twin Peaks? They should totally run the marathon with vegan cherry pie. Mmm. Pie. The patio is dog friendly and it’s really close to the Norwood Dog Park on Riverside so it’s a perfect date* for you and your dog. 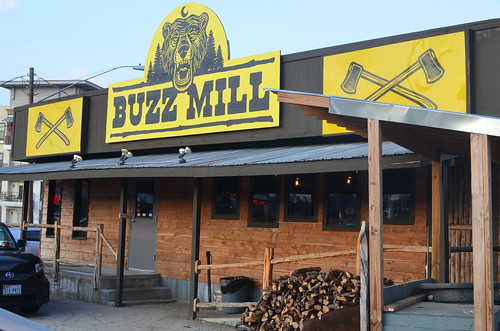 *I mean a nonromantic date obvs. 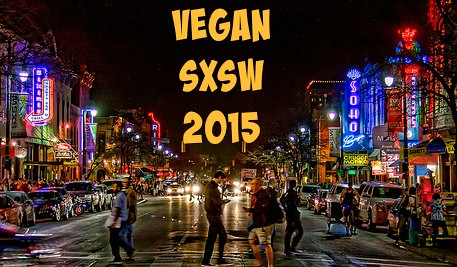 South By Southwest and Spring Break are upon us which means thousands of people are about to flood the city for what is sure to be one endless party…until it ends March 22. Here are some posts to help you navigate. My SXSW guide for folks attending the conference lists places to eat. My Austin Vegan Guide has a list of every vegan option in town. My Tour of Austin guide is everywhere you need to go if you want to eat every awesome vegan thing in Austin. The Taco Guide is the key to having fantastic tacos. My late night guide is a little out of date but most of it holds true. Here’s two awesome posts from Mad Betty How to Get Through SXSW and Fun Without a Badge. Read these and it’s all going to make a lot more sense.

For those attending Interactive there is going to be meet up and party sponsored by Finding Vegan Friday, March 13. You can find vegans!

For the music portion Brooklyn Vegan will be back with a full roster of day parties at Red 7. The great part about the Brooklyn Vegan events is that they always have vegan food so it’s a great daytime activity. Just remember to wear sunscreen if it’s hot out! I always get sunburned at sxsw.

If you haven’t been to Austin in a while tons has changed and I am going to briefly go through the new trailers. Remember that trailers can sometimes move around, run out of stuff, close early, or stay open really late during the festival. They are all pretty good about updating Facebook so that’s the links I am going to use.

Our beloved all vegan cheeseburger and taco truck Arlo’s is now firmly planted on Red River at Cheer Up Charlie’s next to the East Side King. You have to go into Cheer Ups to get to Arlo’s but if there is a cover it will be worth it. I love East Side King too so try them if you need some actual vegetables. Arlo’s is usually open late too.

On the eastside newcomer all vegan Cool Beans is making tacos to order along with the best tamales ever.

Just south of the river Unity Vegan Kitchen opened up their amazing trailer. The lasagna, muffaletta sandwich, and whatever is on special are my favorites!

South of the river and east of IH 35 at the Buzzmill Coffeeshop you will find the Golden Spike Rail Cart which has rotating sandwiches and specials, a french fry bar, tacos, nachos, and a great brunch with breakfast burritos and waffle specials.

Further north but still east outside of the pole dancing training ground of Brass Ovaries are two more new trailers. BBQ revolution has smoked tempeh, soy curls, and seitan that you can have on a sandwich or on a plate with mac and cheese and potato salad. Next door is Bistro Vonish which has a rotating seasonal menu including pizzas and kolaches.

Back in the central part of town a little north of downtown two vegan trailers live at the Spiderhouse Coffeeshop. The Vegan Yacht has been around for a while selling their very popular Frito Burrito and newcomer Maggie’s Waffles has both sweet and savory waffles with pizza toppings.

Rabbit Food Grocery opened a brick and mortar store a few weeks ago. They have more vegan snacks than you ever thought possible and are the perfect place to stock up on snacks to keep in your bag so you always have something to eat.

Counter Culture Vegan Restaurant is now open every day of the week and they usually stay open late during the music portion of SXSW.

Bouldin Creek always pares down to a more limited menu during the festival and they stop taking phone orders so locals I recommend brunching at places a little farther out…like the Steeping Room at the Domain.

Have fun, hit me up on twitter @veganlazysmurf if you have questions or leave a comment here.