Usually I do tons of wrap ups about Thanksgiving but this year was just too busy. And by busy I mean that I accidentally slept until 1:30 pm and had to scramble to get dinner ready on time for maximum relaxing. Instead of making a homemade roast I did the Meet the Shannon’s Apple Sage Molasses Holiday Roast on a gardein roast. I got hooked on gardein in Vegas and this was so good and easy, I think I’ll buy one every year. 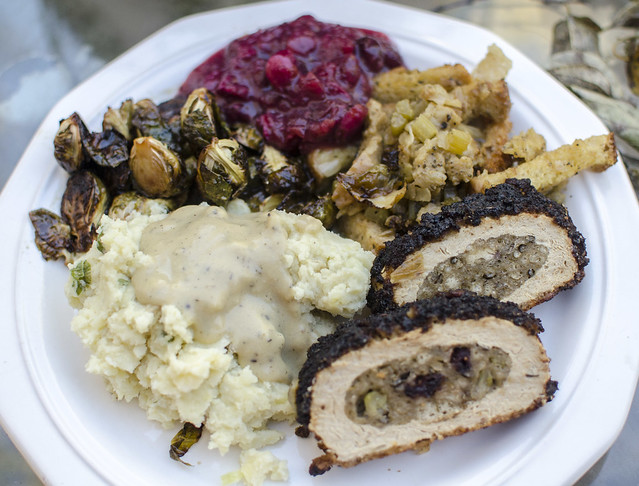 Like last year I made the Diner Dressing and Sage Pepper Gravy from Vegan Diner. I tried to make a super fancy gravy that had dried porcini’s and other mushrooms but it didn’t taste at all Thanksgiving-y so I whipped up this reliable one at the last second. I also veganized a Martha Stewart recipe for Roasted Brussels Sprouts with Orange-Butter Sauce because I had a ton of oranges and I loved it. Then made three pies over the weekend all from Vegan Pie in the Sky, pumpkin pie, chocolate pudding pie, and banana pudding pie. The latter was my favorite but they were all good. It was a good cheat day but now I’m back to taco cleansing and margaritas.