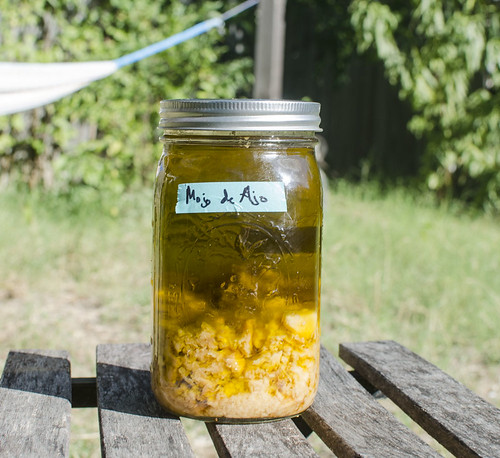 Roasted garlic, fruity olive oil, salt, and a bit of acid are the most important and simplest ways to add tons of flavor to any recipe. I learned about Mojo de Ajo in the new book Vegan Tacos and it has quickly become my secret ingredient superstar.

Basically, you roast a cup and a half of peeled garlic cloves in 2 cups of oil in the oven with some salt for almost an hour. Then, you add half a cup of lime juice and roast for another 20 minutes and the “gravy” turns golden. After that you let it cool, pour it into a jar, and use it in every single thing you make. Add some on roasted potatoes! Cook your fat-free refried beans in it and laugh at the fat-free label! Start your tofu scramble with some mojo! Add some of the garlic to your pizza! Here is the recipe from Rick Bayless.

It’s the most wonderful short cut ever and I wish someone had told me about it years ago. The hardest part was finding already peeled garlic cloves but they were in a back refrigerator at Sam’s Club which means Walmart and Costco probably have them too. Of course, you could peel the heads yourself too but for me it made more sense to drive around to every store in town. I also got some fancy tequilla at the Spec’s next door after talking to a wonderful sales associate from Guadalajara for quite some time so it was actually a very fruitful trip to the strip mall center of South Austin. Maybe I should do a post on tequilla before I forget everything he told me.

In my travels I also learned that while mojo means “sauce” in Spanish (pronounced Mo Ho) when we are talking about “working that mojo” (pronounced Mo Jo like the helper monkey in that episode of the Simpson’s) we are actually referring to a magical charm bag used in hoodoo. I had no idea. That’s three kinds of mojo!