The other day I was considering moving to a different part of the country. Obviously, there are so many horrible parts to moving. Like, I can’t imagine leaving my friends and family here, or selling my house. I started thinking about what I would miss the most about Austin itself like the shiny happy people and the anything goes anywhere dress code. But there are three things I just can’t even imagine how I would even live without. Tacos, Barton Springs, and the Alamo Drafthouse.

My partner and I are big movie/TV nerds since childhood and since our first days back at the original Alamo on 4th and Colorado the Alamo movie theater has been our favorite place. For Christmas we get Alamo giftcards and that’s where we go for birthdays and when we have friends in from out of town. I’ve gone from my first Mister Sinus theater experience of the Lost Boys, to wandering around the park between the four video screens for each of the four tracks of the Flaming Lips Zaireeka, to drinking Romulan Ale at the Star Trek premiere, every SXSW, Karaoke at the Highball, and seeing Leprechaun with Doug Benson every St. Patricks’s Day. I even got to see my friend chase James Franco down the alley behind the Alamo Ritz yelling “Mr. Franco”. It’s always just been a place that seemed meant for me.

Except for one gigantic problem.

While everyone around me is chowing down on movie themed specials and five dollar milkshakes I’m stuck with either the hummus plate, the veggie burger, the cheese-less pizza, the salad without half the stuff, or the plain popcorn. AKA the most boring vegan food in the world. Over the years they have added better vegan items like the Kick-Ass Tofu sandwich and the spaghetti squash pomodoro and then taken them away. The things is, when I go to the movie theater to laugh and drink beer I usually don’t want a meal. I want bar food. Snacks that go with beer. Things that are tasty and deep fried. Or if I’m having coffee and have already eaten I want something sweet. I look at their ice cream list every time, longingly, hoping that something has changed but alas, these snacks never come. Since the day I got twitter I feel like I’ve been harassing the Alamo to come up with something better for us. Once I even came up with a veganized menu that would be at my dream Alamo. It’s an obsession that I had pretty much given up on.

And then, last week, out of the aether I got the message I’ve been waiting for. “We heard you” and want “to extend an invitation to our first ever vegetarian and vegan food tasting and new menu reveal.”

It turns out that one of the kitchen workers at the Village is vegan and rode in the MS150 with Alamo owner Tim League. After a long and difficult training ride their team was scarfing up pizza and he couldn’t participate so Tim decided then and there to come up with some menu items! Finally! The best part, as a vegan blogger, is knowing there is a vegan at the kitchen and I can be certain that the bread and the tortillas are vegan without harassing the staff. And they have a little v for vegan on the menu. I couldn’t be happier. Well…unless they had deep fried olives and Sweet Ritual parfaits.

When I got to the Alamo Village last night there were already a million people there waiting to taste the food. That’s a good sign! We grabbed the four different items and found a seat. 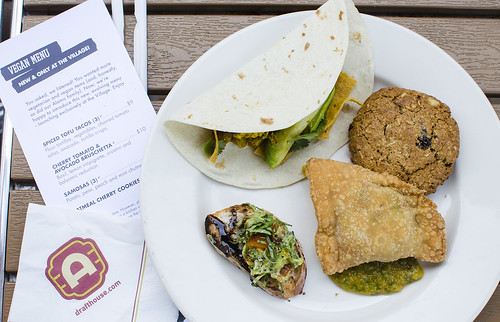 I think I started with the “Cherry Tomato & Avocado Bruscetta” served with basil, lemon vinaigrette, crostini, and a balsamic reduction. 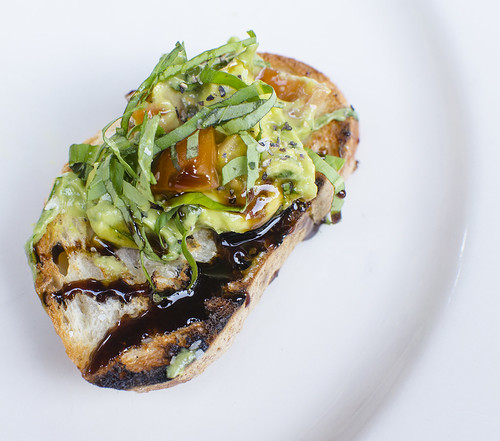 I loved this dish, it’s like what I eat all summer when tomatoes are in season. The creamy avocado was a big yes for me. When they serve it at the theater you will get a big bowl of the topping and then slices of crostini. I love this idea and I am glad they are executing it so well.

I couldn’t believe the main dish was tacos, or in other words: my favorite food. 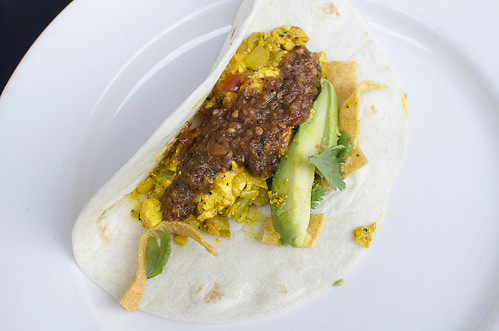 Even though they were called “Spiced Tofu Tacos” I was surprised by how spicy they were, definitely the spiciest tofu in town. The spice was balanced a bit with the avocado and I loved that the extra crunch was with fried tortilla strips instead of something like lettuce (I hate shredded lettuce) but I felt like these could have used another vegetable like baked squash or potatoes. They were a little understuffed but when you order them you get three. I wish there was a corn tortilla option because their flour one was just so-so. I really liked them regardless and I’m so happy to have a taco for when I’m there at breakfast!!!

Next I tried the Samosas that were served with a peach and mint chutney. Now, I’ve never met a samosa I didn’t like and this one was no exception. 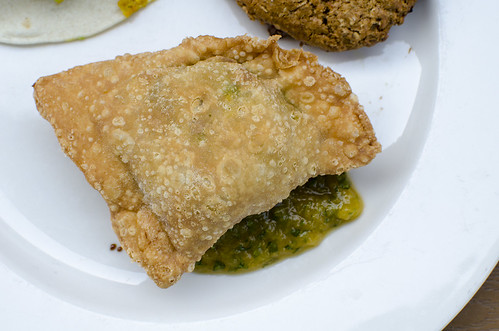 They were pretty good sized and chock-full of filling. The crust was both soft and crunchy, just how it should be. I really liked the chutney too although I usually prefer some sort of tamarind sauce. You get three of these in an order and they are seven bucks so I can see myself getting these quite a bit and I’m sure they will go over especially well with the omni crowd.

Finally, I begrudgengly tried the Oatmeal Cherry Cookie, it didn’t look or sound like something I would like but hot damn, that was a great cookie! It was warm and soft with perfect texture and flavor. It might have been our favorite! That or the Bruschetta. The only thing about the cookies that they could improve is adding some ice cream.

And Jesus Christ get some nooch for the popcorn so I don’t have to sneak my own in. Where are we, North Dakota?

The new menu is available at the Alamo Village only right now, I beseech you to head over there and support it so that it spreads to the other locations. I think now I’ll finally be able to see Chef since I’ll have something to snack on during an entire movie about food.

PS. I’ve never beseeched anyone before and it was really fun. I’m going to start saying it all the time.

7 thoughts on “New vegan menu options at the Alamo Village!”